Posted on February 19, 2019 by thewineraconteur

Holidays, no matter how noble, are nights that we normally try to avoid eating out at restaurants.  Actually, there are so many holidays that are really family oriented, so it gives us a reason to have a big party at the house.  There are some events that people feel that they have to go out for, and alas, I find that many restaurants anticipate the onslaught by reducing the options for the menu, there is a desire to move as many tables as possible and unfortunately the service tends to dissipate.  We happen to eat out enough, that this is not a problem, if we don’t go out, and it does not mean that we are not romantics.  Guess what?  We were going out for Valentine’s Day and we had no reservations.  I had a couple of ideas, but they didn’t work out, so I still had a back up plan, even though it made us sound like a couple of retirees in Florida, we were going to have an “early-bird” dinner and kind of with the “early-bird” pricing.

We went to the new steakhouse in the area that we went to when Ms.  Yoga was in town.  We went to Hyde Park and I discovered that the bar opens for “Happy Hour” at four in the afternoon and the restaurant opens at five.  I figured that we could always eat off of the bar menu, but they were honoring their Early Nights menu as well, which had a couple of different options and a couple of different prices.  We had the Amuse Bouche that was sent out from the kitchen to begin the evening, and there was a bread basket that arrived with three varieties to munch on and a slab of butter that had two different seasonings added on.  My Bride had a Caesar Salad that she has been on withdrawals since there was all of the recalls on the Romaine lettuce, so she was happy, but of course I won’t order a Caesar salad out, unless I have to, because as far as I am concerned, no one can compete with my Bride’s recipe.  I decided to go with the healthy choice of Lobster Bisque with Sherry and poached lobster meat in butter added just before serving. We both went with the Tenderloin Medallions, which were two three-ounce cuts, cooked perfectly with a side of Bearnaise Sauce.  I guess we are slowing down, because in the old days a Queen cut was eight-ounces of filet, and now we were sated from six-ounces, actually I had nine, as she only wanted three; and it was way to good to leave or to reheat.  We had no room for dessert. 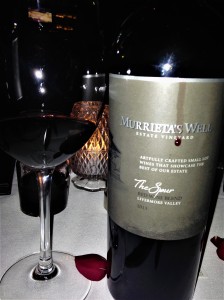 As I was studying the wine list, as a way to drive my Bride a little crazy, because I know that they use the Coravin system to pour glasses of some of the “unicorn” wines and so that she will think that I am being fiscally irresponsible.  I calmed her down and found some wines to make her happy, in fact, she jumped on the first wine that I mentioned and claimed it for herself.  She wanted some wine that I was able to do a virtual wine tasting of, of another vintage and she had a glass of Murrieta’s Well “The Spur” 2015 from Wente Family Estate in Livermore Valley of California.  Louis Mel started planting grapes in the 1860’s and they were not just any grapes, but cuttings from Chateau d’Yquem and Chateau Margaux.  In 1884 Louis Mel built and installed in a hillside a gravity flow winery.  In 1933 Louis Mel sold his winery to Ernest Wente and the winery has been part of the Wente Family Estate ever since.  Here is a blended wine that features fruit grown in two of their vineyards.  The Petite Sirah and part of the Cabernet Sauvignon were grown in their historic Louis Mel Vineyard.  The balance of the Cabernet Sauvignon, Merlot, Petit Verdot and Cabernet Franc came from their Sachau Vineyard.  All of the varietals were fermented individually in Stainless Steel, and then they were blended together and aged in French Oak for twenty-four months, of which half was new, a quarter of the barrels were used for the second time and the other quarter were aged in barrels used for the third time.  While the wine is forty-eight percent Cabernet Sauvignon and thirty-two percent of the other famed varietals from the Medoc, there was twenty percent Petite Sirah to give the wine a Livermore Valley zing.  There were three-hundred-nine barrels produced and they suggest that this will be enjoyed up to 2023.  It had that Black Cherry color and the taste evoked Black Cherry with a nice long finish, so she was a happy camper.  I opted for something new and went with the Rodney Strong Upshot Red Blend 2015 from Sonoma County.  Rodney Strong Vineyards was founded in 1959 and Rodney Strong was considered one of the pioneers of Sonoma County.  In 1989 the Klein family bought the winery and kept Rodney Strong on as a consultant until he retired in 1995.  The wine came from Sonoma County and basically from Alexander Valley and Knights Valley.   The wine is a blend of Zinfandel, Merlot, Malbec, Petit Verdot and five percent Riesling.  The wine had a nice deep color, but I thought more of blackberries and spice, and the Zinfandel was the predominate varietal that I could taste and it was big, but on the sweeter side compared to “The Spur.” So, as we left the restaurant on Valentine’s Day and noticed that the dining had filled up, it was still daylight and our dinner was finished by five thirty.