Posted on January 30, 2019 by thewineraconteur

I do enjoy going into a wine shop, as I never know what I may encounter.  On one of my infrequent, though my Bride might think it is very frequent stops at the Fine Wine Source I got a chance to taste two wines from vintages that were nine years apart.  Once in a blue moon, I may encounter a chance to try some Library wines if there is a guest winemaker that I am going to see, but to just walk into a wine shop and get an offer like that is one that no one can refuse.  At least I can’t think of one. 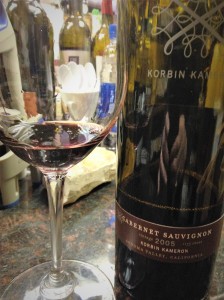 Moonridge Vineyards’ Korbin Kameron wines was started by Mitch Ming and his family and named after his twin sons Korbin and Kameron.  The winery was planted in 2000 and estate straddles the ridge of Mount Veeder, with part of the estate in Napa County, but the majority being on the Sonoma County side.  The vineyard is on 186-acre property on Mount Veeder in Sonoma County.  The winery is growing the classic grapes of Bordeaux with very great success.  The area is famed for having a very long growing season, so the grapes can fully mature and become fully balanced.  In 2013 Moon Mountain AVA was created and recognized for being the longest growing season for the Sonoma Valley, and also for its rich volcanic soil, with perfect drainage to make the roots of the vine struggle and to grow deep.  The Moon Valley AVA is so relatively new that it has not been seen that often and some wineries may not take advantage of it, until it becomes more widely known.

The first wine that I had was the Korbin Kameron Cabernet Sauvignon (Moon Mountain) 2005.  The wine shop had this wine listed as Moon Mountain AVA, but the certification didn’t arrive for another eight years, but the estate and vineyard hadn’t moved, so I can appreciate the gesture.  There was almost no information about this vintage, but I will take an educated guess that the production was less than eight-hundred-cases of wine, and through the years, there is probably not that much left floating around, as the winery does not even list it on their Library selection.  The color and the nose in the glass belied the age of the wine, as I could not ascertain any aging signs.  The finish was beautiful with a very long count, and I even paused a bit, before trying the next wine.  The next wine was the Korbin Kameron Cabernet Sauvignon Moon Mountain 2014, which now is officially of the new AVA status.  The wine was aged for eighteen months in French Oak, of which half was new.  There was six-hundred-thirty-cases produced of this wine.  This wine, maybe it was psychological, but it smelled younger, if that makes sense and the taste was more jammy and black fruit forward, whereas the first wine had mellowed out much more.  The finish was long, but not as long as the first wine and I just attribute that to the age and the mellowness, or maybe that is just my built-in bias towards older wines.

A non-technical wine writer, who enjoys the moment with the wine, as much as the wine. Twitter.com/WineRaconteur Instagram/thewineraconteur Facebook/ The Wine Raconteur
View all posts by thewineraconteur →
This entry was posted in Wine and tagged Cabernet Sauvignon, California, Korbin Kameron, Moon Mountain AVA, Moonridge Vineyards, Sonoma County. Bookmark the permalink.