Posted on January 22, 2019 by thewineraconteur

Some months I seem to scramble to get enough articles for my self-imposed every other day schedule.  The Fine Wine Source in Livonia has been able to help me with new wine tastings and we even joined their monthly club.  I look to the monthly wine club selections as a way for me to have some wines that I might not stop and get, when I am shopping, because we all have our comfort zone, and it is sometimes hard to leave that zone, even when shopping for wine and you are looking for something new to try and to write about.

Anyone that has followed me for some time, realizes that I am not the typical wine writer and that I can get off on a tangent on a small detail, or the design of a label, and I like to collect labels for my scrap book, since the walls in my cellar are now covered with labels.  The first wine from a label standpoint I may have passed on, but as the old saying goes, you can’t just a book by its cover; and as a side note I am a bibliophile.  Chronic Cellars Spritz & Giggles Grand Cuvee NV from Lodi, California fits that description nicely.  Jake and Josh Beckett began working for their father Doug Beckett at Peachy Canyon Winery and the wine bug got both of them.  They launched Chronic Cellars in 2007 with a fifty-six-case production of Petite Sirah, and they are now up to an annual production of thirty-thousand cases of wine.  They were so successful that they were bought by Winery Exchange in 2014, with the proviso that they both continue working in their positions.  Spritz & Giggles is made from a blend of Pinot Noir and Chardonnay and the fruits were sourced from the North Coast.  The wine is produced using the Charmat Method, which is the more economical way to produce sparkling wine.   The longer the duration of fermentation in this method, preserves the wine’s aromas and creates finer and more bubbles, but a lot of bulk producers are not that concerned about these nuances.  The tasting notes suggest more fresh fruit in both aroma and taste, which sounds fine for a young sparkling wine.  It is also suggested that it will pair well with desserts and salty snacks, cheeses and Charcuterie. 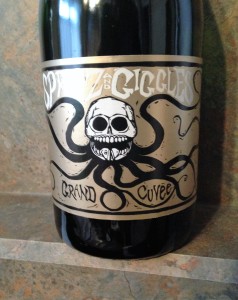 The other wine was Lanciola Chianti Colli Fiorentinti DOCG 2015 from Azienda Agricola Lanciola.  Chianti Colli Fiorentini is a sub-region of Chianti and not as popular or as famed and like Chianti it is known and required to have Sangiovese and Azienda Agricola Lanciola also grows Colorina, Cabernet Sauvignon, and Merlot; they also have olive groves.  They have fourteen hectares, ten of which are devoted to vineyards.  The wine is ninety percent Sangiovese and the balance are from the other grapes grown.  The fermentation is done in Stainless Steel, and the aging is done in a mixture of Stainless Steel and oak with a minimum of six months.  The notes on this wine call for a deep violet blood red with dark fruit aromas to the nose and on the tongue with a berry finish.  It is suggested that it would be best with grilled meats or Pasta Bolognese.  I think both of the wines will be reported on, later this year.