Posted on January 4, 2019 by thewineraconteur

Christmas Day is always hectic, or at least it was to us.  After my Bride came back from assisting in the rites at her church for the morning mass, she came home and we exchanged the Christmas presents.  The next thing I knew we were packing up the car to take more presents and other stuff for a trip to her Mother’s for the Traditional Christmas Brunch of pancakes, scrambled eggs with spinach, doughnuts, bacon and fresh kielbasa.  The only thing that may have been updated to this breakfast was perhaps Mimosas and I think that was snuck in years ago, probably by my Bride, and years before she ever met me. 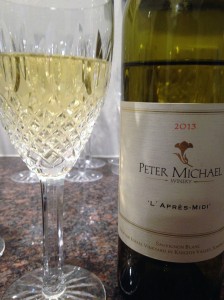 After the Traditional Christmas Brunch, we packed up and drove home to partially prepare an entree of Bourbon Salmon and take that to my cousin’s home as she was making dinner.  I think my cousin must have cornered the market on two Armenian delicacies for appetizers, because they were coming out of the ovens continuously for an hour or so.  There was Cheese Beoreg, an extremely flaky puff pastry stuffed with white cheese and there was Lahmajoon which if you can imagine small five-inch diameter light dough “pizzas” covered with a paste of ground lamb, tomatoes, onions, garlic and parsley followed by a generous dusting of cracked red pepper seeds; I could have made my entire dinner on those two dishes.  The dinner’s star attraction was this incredible tenderloin cooked perfectly and could feed the army of guests, along with Armenian Pilaf, “Hot Ham” which is a time honored and revered dish that has to be there, and some of the finished roasted peppers one could ever encounter, the aforementioned salmon, spaghetti with clams, salads, vegetables and the list still goes on.  Then later on, after all of that is cleared away, enough desserts to rival a sweet table at a wedding.

Of course, before and after dinner, most of the men gathered in an alcove in the family room to have some libations.  The two most popular beverages were beer and Scotch, but fear not there was plenty of wine as well, and I will only mention two of the many bottles that were there.  We started with Peter Michael Winery “L’ Après-Midi” 2013 from the Knights Valley AVA.  Here was a charming white wine that was basically Sauvignon Blanc with eight percent Semillon and these grapes were grown alongside the famed “Les Pavots” vineyard for their Bordeaux blend wine.  The juices were aged on the lees for eight months in French Oak and then blended together for a very fruit forward finished wine with the fable terroir that has made Knights Valley so popular and singular in Sonoma County.  The other was a wine that I brought as a special treat for the tenderloin that I wanted to share with the wine drinkers.  I opened up a bottle of Yao Ming Cabernet Sauvignon Napa Valley 2014 Yao Ming had retired from a career in basketball in July 2011, he began a new career as a winemaker in November 2011, barely enough time to realize that he had retired. Yao Family Wines owns no vineyards in Napa Valley, but they do have a tasting room in St. Helena, with contracts with vineyards in Coombsville, Atlas Peak, Oak Knoll District and St. Helena, but the wines carry the Napa Valley AVA. The Yao Ming Cabernet Sauvignon 2014 was the perfect wine to end the evening with. The wine was almost entirely Cabernet Sauvignon, but there was 5% Merlot, 3% Cabernet Franc and 2% Petit Verdot, and of the Cabernet Sauvignon there were three different clones and each was vinified separately before the blending. Here was a wine that was aged for eighteen months in French Oak, of which 65% was new, and they had created a wonderful drinking wine even with a high 14.3 Proof, and I knew that this would be the last of the case that I would open up as I think it will require about ten years and then this wine would be wonderful and by then I am not sure how much of this vintage will still be around.  There were twenty-eight-thousand cases produced of this wine and I think that I heard that it was sold out at the winery, and I do believe I may have gotten one of the last cases of the wine in Michigan.  As I like to say “even a blind squirrel finds an acorn occasionally.”