An Older and a Younger

Posted on December 29, 2018 by thewineraconteur

There we were, The Wine Raconteur Senior and Junior getting ready to sit down for dinner.  We had just finished having appetizers and now on to the main event.  It was even better because we had our Brides with us, as well as the family of the Junior.  The two of us go back quite a few years and always with great memories.  Let us just say that there is some twenty plus years that divide us apart.

For our Christmas dinner, my Bride had made her Bourbon Marinade Salmon, the dish that she is making quite often these days and to be quite honest, people have even started requesting it.  She also made Armenian Pilaf and Green Beans.  She finished off the meal with a Tiramisu cake.  It was not a real elaborate meal, but a good satisfying meal, that she had decided on, that would even keep the children happy and it did, as we were told that the daughter of The Wine Raconteur Junior has become quite the maven on Salmon, and my Bride passed the test. 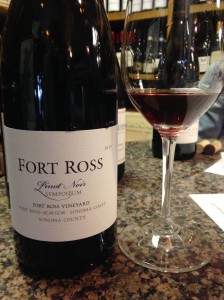 The varietal of choice with Salmon for us is Pinot Noir, and I am sure that some may shake their head and think that I have totally lost it, putting a red wine with fish, but I really like the combination.  I find that the oily texture of Salmon especially depending on the marinade really harmonizes with a Pinot Noir.  All I had to do was go and pick out a wine from the cellar.   I found a nice older bottle of Talbott Pinot Noir 2007 from Monterey County.  I have a certain fondness for Talbott wines, just like I have a certain fondness for his parent’s neckwear line Robert Talbott.  This is the beauty of having a cellar, because the odds are that this wine would have been gone with a smaller collection of wines, but it was allowed to age and it really mellowed out.  I let it breathe for about an hour before dinner, and when I poured it, the color was still quite dark with no signs of softening or browning.  The nose, while not the strongest Pinot I have had, let me know that it was a Pinot.  The taste was so mellow and silky that I am not sure if I could have deduced that it was from Monterey County and I have had plenty from there over the years.  Of course, the dinner was still going strong, but the Talbott had evaporated, so I went and found a younger Pinot Noir for a comparison, and it was stellar in its contrast.  The Fort Ross Symposium Pinot Noir 2013 took over the balance of the dinner.  Fort Ross Winery used the fruit from the Fort Ross Vineyard and the wine is from the Fort Ross-Seaview the only sub-region from the Sonoma Coast AVA.  This youngster came out like gang-busters, but it sounds odd, but it was elegant and sophisticated even for its youth.  The fruit was very much evident, but not in a brassy-showy way.  I think both wines were equal in their star appeal, but definitely not clones of each other.  There was plenty of conversation about how each of the wines showed their style.  So once again, we can see that older and younger can be harmonious side by side and at the same table, in more ways than one.

A non-technical wine writer, who enjoys the moment with the wine, as much as the wine. Twitter.com/WineRaconteur Instagram/thewineraconteur Facebook/ The Wine Raconteur
View all posts by thewineraconteur →
This entry was posted in Dining, Wine and tagged California, Fort Ross Vineyard & Winery, Fort Ross-Seaview AVA, Monterrey County, Pinot Noir, Robert Talbott Winery, Sonoma Coast. Bookmark the permalink.

2 Responses to An Older and a Younger