Ms. Yoga is So Popular

Posted on December 9, 2018 by thewineraconteur

While we were taking care of Ms. Yoga at the Casa Raconteur, her family was making preparations for a party while she was in town.  We are used to having to share her with the world, as she tends to be that grandiose.  We figured out that we were going to have a quiet night, while she was being feted by her family, but that was not the case.  We were invited as well, I mean it is not like we are strangers to her family, especially my Bride who has known her parents, her siblings and the rest of her family for ages, and as for me, they just realize that I tag along with my Bride. 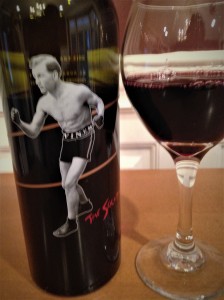 The party was held at the “compound” as one of her niece’s refers to her house, she made it sound like the complex that Don Vito Corleone lived in, in New York, or the one Michael Corleone resided in at Reno, not that elaborate, but very fancy.  It was the type of dinner party that I can relate to, as it is how we do it, with all of the food spread out on the island in the kitchen and you go and make your plate according to your own desires.  One of the main choices was a spiral cut ham on the bone, which at the end of the party and they were offering “doggie bags” we opted to take the bone home, but the bone had already been called, as I guess other people like to make soups as well.  I was just happy to make some fresh sandwiches.  My Bride and Ms. Yoga were both in their element, as they could both just nosh on appetizers.

We took some wine to the soiree and I know that you are so surprised, but there were some interesting wines there as well.  Since the wines that we took to the party were wines that I have talked about in the past, and I will discuss a couple of bottles that were waiting there for us.  The first wine, is one that I have encountered now and then from the Michael Mondavi Family group and it was their Oberon Cabernet Sauvignon Napa County 2016.  I guess that either I have been asleep or this is the first time I had seen the Napa County AVA as opposed to Napa Valley AVA.  I guess with all of the sub-regions in Napa Valley, it is only to be expected that the valley would be swallowed up by a little larger land group.  The fruit is listed from five different areas; Oakville, Oak Knoll, Yountville, Chiles Valley and Capell Valley.  The wine is listed as being ninety-four percent Cabernet Sauvignon and the other six percent are described as “a kiss of Syrah and a dash of Merlot,” and I like that listing.  The juice had extended maceration in Stainless Steel and then spent fourteen-month aging in French Oak, of which forty-five percent was new.   I will tell you that it was a fine example of a Cabernet Sauvignon, it was not stellar, but then again it was not wimpy and it is affordable, so I would say that it is good bang for your buck.  The other wine among the many that were there really caught my attention and since I was one of the people that ended up opening the wine bottles, I looked forward to this one.  It was a bottle of Vinum Cellars “The Scrapper” Cabernet Franc 2015 and featured a pugilist on the label.  Vinum Cellars is located in Oakville and it was founded by two friends who financed the original endeavor with their credit cards.  They pride themselves on making varietal wines from single vineyards and this wine was a Cabernet Franc from El Dorado County which is part of the Sierra Foothills.  The wine was aged for twenty-six months in used French Oak barrels and was a nice heady 14-15% Proof.  This was an enjoyable wine that I found to be rather silky, with a fine nose and some black cherry and some vanilla in the mix.  If I had any complaints about this wine, is that I think it was probably opened up, maybe ten years too early.  A grand time was enjoyed by all.