Posted on November 25, 2018 by thewineraconteur

Another hectic day preceding an even more hectic day as we get ready for Thanksgiving.  It is my Bride that does all of the Herculean tasks and I wisely try not to get in the way.  I just try to get her requests done as efficiently and silently as possible.  She is the real culinary artist here, if everyone waited for me, we would all starve with my abilities in the kitchen.  She has been buying the required ingredients and she is all ready for the big day.  We had some free time and I suggested that we go see the new Rowling film, as my Bride is a huge fan and that gave her a few hours of peace and rest.

The Louisville clan left early enough that we could meet them at the hotel for dinner.   Now Thanksgiving Eve is a night that you want to eat and drink early enough, as it is considered the biggest night of the year for restaurants and bars, even surpassing New Year’s Eve and St. Patrick’s Day.  We all met at Sweet Lorraine’s for dinner, a restaurant that we usually use at least once during their frequent visits up here.  I go back to the original Sweet Lorraine’s when it originally opened in Oak Park and it was like Detroit’s version of Alice Waters back in the Seventies.  Even with the restaurant that they manage in a hotel, you still feel the original vibes to this day, as I guess that the world actually started eating healthier back in those days.  One of the unique aspects of Sweet Lorraine’s is that it is not a cookie-cutter style hotel eatery, and even an old school carnivore like me can find something to eat there without complaints, and all of the young adults from the clan could find something as well. 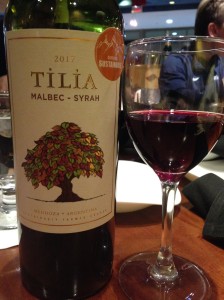 We started off with Domaine LaFage Novellum Chardonnay 2015 with an IGP Catalanes.  The IGP Catalanes is considered one of the more important classifications of Table Wines and also one of the most productive regions in France, and it is in the Languedoc-Roussillon area.   Domaine LaFage is known in the area as a winemaker of dry wines in all three colors and also known for three sweet wines from the region as well.  The Louisville clan has been shifting away from the big oaky Chardonnay wines that were so prevalent, so I thought I would try a wine that was not an oak bomb, like the other Chardonnay wines that were being offered.  This wine is a blend of juice that had been aged both in Stainless Steel and French Oak and then blended for an easy drinking wine that belied the Table Wine designation.  The second bottle of wine that we had was Bodegas Esmeralda Tilia Malbec-Syrah 2017.  Here are two famed French varietals that have become important grapes in other parts of the world and Malbec is really a King in the Mendoza region of Argentina.  This wine was sixty percent Malbec and the balance were Syrah and it was well balanced, but on could definitely appreciate the Malbec.  This wine was aged for six months in a mix of French and American Oak barrels with ten percent of them being new.  We had two good wines, but the fun will be in the what we will drink during the Thanksgiving dinner.

A non-technical wine writer, who enjoys the moment with the wine, as much as the wine. Twitter.com/WineRaconteur Instagram/thewineraconteur Facebook/ The Wine Raconteur
View all posts by thewineraconteur →
This entry was posted in Dining, Wine and tagged Argentina, Bodegas Esmeralda, Domaine Lafage, France, IGP Catalanes, Languedoc Rousillon, Malbec, Mendoza, Novellum, Syrah, Tilia. Bookmark the permalink.