Posted on September 24, 2018 by thewineraconteur

I picked up two new red wines from my new wine club at Fine Wine Source in Livonia.  I had a very strange week and I could hardly manage to squeeze a trip over there, because I knew that I could not do any additional wine tastings that afternoon.  I look forward to what Jim Lufty and his group are featuring, as there are usually twenty-some wines that are begging to be tasted and evaluated.  It truly is a shop that I like to linger in and talk about wines.  I felt almost ashamed that all I could do was grab the bag and go back into the fray of errands.

The first wine that I took out of the bag and will eventually open was Domaine Lafage Bastide Miraflors Vielles Vignes Cotes du Roussillon 2018.  Domaine Lafage is a major estate in the Roussillon in all shades and hues and from dry to elegant dessert wines like their Muscat de Rivesaltes.  They own about one-hundred-sixty hectares with vines that are hitting the century mark, hence “vielles vignes.” The Bastide Miraflors is a custom cuvee and is a blend of seventy percent Syrah and thirty percent Old Vine Grenache.  After six weeks of maceration the Grenache is aged for twelve months in concrete and the Syrah is aged in French Oak.  This is a deep purple wine that is made to be enjoyed immediately or in the next couple of years, and it has a heady 14.5% Proof.  I usually don’t quote ratings, but for a very affordable wine Robert Parker gave this wine 94 Points.  The owner of Fine Wine Source says “this is the best Syrah based wine you can buy for the money!  Rich yet elegant on the palate with a silky and satisfying finish.” 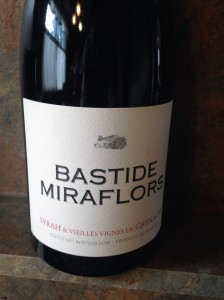 The second wine is even quite headier with a 15.9% Proof.  The Midnight Cellars “Nebula” Cabernet Sauvignon 2014 hails from Paso Robles in California.  A business man from Chicago retired and bought a one-hundred-sixty-acre ranch with twenty-eight acres currently planted with vines in Paso Robles in 1995 and it is the home for three generations of families that are maintaining the winery.  Midnight Cellars is the twenty-ninth established winery in Paso Robles and they are in the newly designated area known as Willow Creek District.  The “Nebula” is ninety percent Cabernet Sauvignon and the balance is Merlot.  The wine was aged for eighteen months in French Oak, the production was seven-hundred-sixty-five cases and is completely sold out at the winery.  Jim Lufty says “rich, intense and loaded with layers of complexity, flavor and a long lingering finish.”  I would say that I am looking forward to trying them both out.