A Virtual Wine Tasting of Some German Wines

Posted on September 12, 2018 by thewineraconteur

I have another virtual wine tasting this evening under the good graces of the wine site Snooth.  This is the second virtual wine tasting that I have been invited to participate in, and I now have a much better idea of what to expect.  Even if you are not participating in the tasting, one can watch the event in real time by going to Snooth.com.  The event will begin at 8:30 EDT and the host this evening will be Matthew Kaner, a wine director and partner at several wine bar in the Los Angeles area.  Mr. Kaner will be discussing the wines in sequence and those of us involved in the virtual tasting will be responding and typing our notes during the tasting and they will appear on a side bar, so that all can read and appreciate the observations of the others. 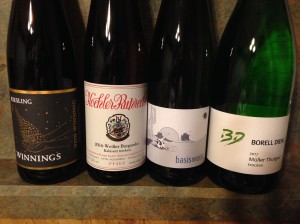 I have to admit that I went back and did some studies about the wines of Germany, as I do not encounter them that often.  In the old days when I first started learning and teaching myself about wines; France, Germany and Italy were the three main players that one would encounter in wine shops and in restaurants.  In the 1960’s and the 70’s the three largest selling German wines were Liebfraumilch, Blue Nun and Zeller Schwarzer Katz.  The first two were from the Rhine regions and the latter was from the Moselle-Saar-Ruwer.  As I was unpacking the wines I was trying to find a common denominator as the wines were from different wineries, and the only commonality was that the four wines were from the Rhine region, three from the Rheinpfalz and one from the Rheinhessen.  The varietals were all different as well.  Three of the wines were Qualitatswein, which is the second tier of German wine classification and then the wines must come from thirteen official wine regions; this classification probably accounts for the bulk of wines that one finds routinely.   The fourth wine is a Qualitatswein mit Pradikat, or fine quality.

The wines will be tasted and discussed to reflect the weight of the grapes from light to heavy.  We will begin with Weingut Borell-Diehl Muller-Thurgau 2017.  The next wine will be Weingut Koehler-Ruprecht Weisser Burgunder (Pinot Blanc) Kabinett 2016.  The third wine will be Weinreich Basisweiss Pinot Gris 2017 and then followed by Weingut Von Winning “Winnings” Riesling 2015.  I am looking forward to the evening and the following hashtag #TasteTheNew will be used on Facebook, Twitter and Instagram.

A non-technical wine writer, who enjoys the moment with the wine, as much as the wine. Twitter.com/WineRaconteur Instagram/thewineraconteur Facebook/ The Wine Raconteur
View all posts by thewineraconteur →
This entry was posted in Wine and tagged Germany, Rheinhessen, Rheinpfalz. Bookmark the permalink.