We were coming up to the final two wines on the virtual wine tasting organized by Snooth featuring the wines of Murrieta’s Well with the guest speaker Robbie Meyer, their winemaker.  I think that I was kind of getting with the program, though a little late, because I was a complete novice, considering that half of my life was in the Twentieth Century, but my Bride and I were having fun.  I think that she was having more fun with the tasting initially, because she was just enjoying the wines, but I kept prodding her to give me terse and concise statements about each wine as she perceived them and I think she had never really focused her winetasting in that matter.  I am not saying that I am so learned about the process, since I have never had a wine course or a wine test per se.  At this stage of my life I really am not interested in getting a Sommelier designation, though I really admire those that have them and especially those that are moving up the ranks.  I am first and foremost a wine lover and secondly, I am a raconteur that likes to share the moment where the wine added color and texture to that moment. 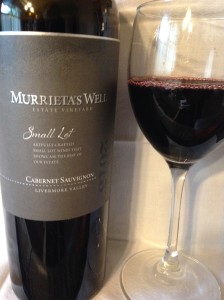 We were now finishing off the talks of the two white wines and the dry rosé and heading to the last stretch which were two different red wines.   The first wine we tried was Murrieta’s Well “The Spur” Red Wine Blend 2015.  Here is a blended wine that features fruit grown in two of their vineyards.  The Petite Sirah and part of the Cabernet Sauvignon were grown in their historic Louis Mel Vineyard.  The balance of the Cabernet Sauvignon, Merlot, Petite Verdot and Cabernet Franc came from their Sachau Vineyard.  All of the varietals were fermented individually in Stainless Steel, and then they were blended together and aged in French Oak for twenty-four months, of which half was new, a quarter of the barrels were used for the second time and the other quarter were aged in barrels used for the third time.  While the wine is forty-eight percent Cabernet Sauvignon and thirty-two percent of the other famed varietals from the Medoc, there was twenty percent Petite Sirah to give the wine a Livermore Valley zing.  There were three-hundred-nine barrels produced and they suggest that this will be enjoyed up to 2023.  Here were our original thoughts on the wine.  I found the wine to have a good deep color with a soft reddish ring with cherry and cloves to the nose.  A big chewy wine with a long count for the aftertaste.  This would stand up very well to a nice full bodied red meat dish.  My Bride described and liked the Dark Cherry color with a cherry nose.  She thought it was a soft Cabernet Sauvignon blend and she would prefer it with a steak and not by itself.   As we went back for second tastings with the wines opening up more with time we were both very happy with this wine, but we both felt that this wine was still a better wine with a meal as it would pair very well with an assortment of dishes and she thought that she would like to try it with her marinated grilled salmon and I was still leaning more for some red meat, though I thought it might even be interesting with a pork tenderloin, because of the Petite Sirah.  As hard as my Bride tried she lamented that she could not taste her favorite varietal, namely Cabernet Franc in the wine, but I was explaining that there was so little in the blend that it was there to enhance the character of the wine. 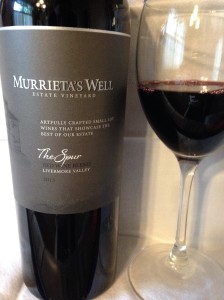 The last wine of the evening and we were rather sad for this session to end was a big wine, and to my way of thinking that is always how a wine tasting should end.  The Murrieta’s Well Cabernet Sauvignon Small Lot 2015 was such a wine.  Here is a wine that can call itself a Cabernet Sauvignon because it is eighty-seven percent of the blend, and the fruit came from both the historic Louis Mel Vineyard and the Sachau Vineyard.  The wine was also blended with Petite Verdot and Malbec both of which were from the Sachau Vineyard.  The varieties were hand sorted and fermented for ten to twelve days in small Stainless-Steel tanks where they were pumped over three times daily, with varying amounts of time that the juice was left on the skins.  The wine was then aged for eighteen months in French Oak, of which eighty percent was new and the balance was either second or third time of usage.  There were twenty-seven barrels produced and they feel that this wine will age through to 2025.    Our initial thoughts on this wine and what I typed into the side bar where all the other wine bloggers were adding their opinions as well was that I felt it was a strikingly good inky Garnet with softer red rim and a real Cabernet nose.  A heavy Cabernet Sauvignon presence, but not an abundance of fruit (not a big jammy wine that some are so enthralled with), rather it had balanced tannins and a good aftertaste.  Definitely a great wine for a Filet or Braised Short Ribs.  My Bride said it was the color of my Garnet stoned pinky ring with a soft nose.  A Cabernet Sauvignon that she would like with lamb.  As we were having our second and third tastes of the wine I was enjoying the layers of texture and nuances, while my Bride was enjoying this wine more as the wine was opening up more in the glass.  This was just a totally fun and interesting experience and we really did enjoy the session and compared the evening to other sessions that we have both attended.  She actually does more of the wine shopping, so I will be curious to look at her future purchases to see if she has had success locally with any of these wines.  As for me, I was so geeked up by the event, that while I was finishing the wines that I had poured for my tastings, I actually wrote my first article.

A non-technical wine writer, who enjoys the moment with the wine, as much as the wine. Twitter.com/WineRaconteur Instagram/thewineraconteur Facebook/ The Wine Raconteur
View all posts by thewineraconteur →
This entry was posted in Wine and tagged Cabernet Franc, Cabernet Sauvignon, California, Livermore Valley, Malbec, Merlot, Murrieta's Well, Petit Verdot, Petite Sirah, Small Lot, The Spur. Bookmark the permalink.