Posted on July 8, 2018 by thewineraconteur

Samples of wine sounds so enticing.  I think that every wine blogger when they begin writing, that they will come under an avalanche of wines sent to them, so that they can write about the wines.  For the past fifty years I have had the pleasure of tasting and drinking wines, and for the last six years I have even started rambling about the wines that I have tried.  I have never had to worry about offending anyone or a winery, because the price of admission was always from my own wallet, save for the few times that I have been to affairs where the wine was part of the evening. 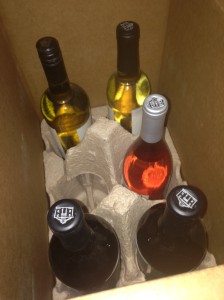 Of course, when I did begin in earnest to learn about wines, it was kind of a rare item.  Cocktails and beer were the drink of the day and people that had wine cellars were far and few between.  Where I grew up, home-made “Dago Red” fined with egg whites was the usual wine one would encounter.  Houses had entertainment centers that were pieces of furniture with a record player with built-in speakers and a cabinet that had room for fifths of liquor, or the liquor was sequestered in the lower cabinets of dining room china cabinet.  Wine was really an after-thought, unless there was something to celebrate and then maybe there would be some “French” Champagne and I remember the first time drinking that, I must have been about seven or eight and I remember the puckering up sensation that I had, because the wine was so “dry,” and I had no words to describe it back then.  Which leads me to that eternal problem that I have about writing about wines, in that I have no real training in the appreciation of wine, it was all self-taught and when I would find a mentor in my youth, the wine was described as “this is what a fine Medoc tastes like” or “this is not what you should expect from a good Chablis.”  The charming descriptors that are bandied about these days, I have only seemed to have noticed for the last twenty or so years, and it seems that some go out of their way to embellish their descriptions as if they are tweaking the nose of the others at a tasting to let everyone know that the others are not as sophisticated as the embellisher.

Why do I bother even mentioning samples?  I think it is become a marketing tool for wineries and distributors to get the word out about the wines.  Historically I went to tastings or to wineries to try a myriad of different wines, because there were always some wines that I was not interested enough in, to buy a bottle of wine for my dinner, and for years that was the only way one could have wine in restaurants unless one wanted some mystery wine that arrived in a carafe.  I have only been to one restaurant in my life where the Sommelier actually had a tastevin hanging around his neck as part of his tuxedo.  The Sword of Damocles is now hanging precariously above me, as I have been contacted to try some samples.  While others would jump at the chance, and I am sure that some even court the powers to be for samples, I come from an era and a mind-set that one never asked, as it just was not the proper thing to do.  In the past, there have been plenty of wines that I have tried that I have never written about and I am sure that this will still occur in the future.  Since I know that the Sword is dangling overhead, all I can say is that I will always be honest and one will have to read between the lines.  If I am enthusiastic about a wine, I will say so, and if I am not, there will be very little to mention, as I realize that there are people that make a living in the production of wine and it would bother me if they lost their livelihood because of what I wrote.  This was a lesson that was burned into my memory, because I used to have a customer whose wife was a famed restaurant critic for one of the daily papers, and she told me that she would anguish over an article if the restaurant did not fulfil her criteria for a proper meal.  Whether I have another set of samples sent to me, is in God’s hands, but I can only do what I think is proper, and I will always mention that the wines are samples, because the odds are that I will still be writing more about wines that have been purchased.