As always, it is not too difficult for me to find some time to do some wine tasting.  I mean, not that I really need any wines to add to the cellar, even if I had room, but one never knows what lays ahead.  On one of my trips to Fine Wine Source in Livonia, Michigan I had a chance to sample some wines.  If one is not prepared they will be over-powered by the tastings that are offered in the shop.  In one area they are doing tastings of domestic wines, and in another section of the shop there are imported wines.  The shop is not that large and after you take into account the racks and cases of wines all around, add the help and then add the customers, you are talking about a ready-made party of new friends.  The shop uses the Coravin system to keep the wines sound, between tastings and I probably drive them nuts taking photographs of the wine in the glass next to the bottle.  I will mention two wines made by established wine making families. 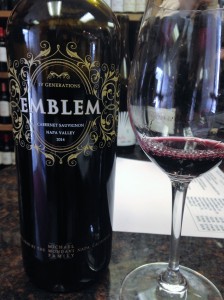 The first wine that I had was by the Michael Mondavi Family, their Emblem Cabernet Sauvignon 2014.  The Michael Mondavi Family was formed in 2006, and of course the Mondavi family is one of the old guard in Napa Valley.  This company has a couple of different series and the Emblem series is one.  The wine is a blend of seventy-nine percent Cabernet Sauvignon and is blended with Petit Verdot, Petite Sirah, Syrah and Zinfandel.  After fourteen days of fermentation on the skins, the wine is then aged in small French Oak barrels for eighteen months.  I found the wine to have a good nose, deep color and a nice long finish; a wine that I could really chew.  This was not a bargain Cabernet Sauvignon, and it was affordable.

The other family wine that I tried was a new one for me, but that is very easy, for me to find new winemakers.  The Marietta Cellars Family Series Armé Cabernet Sauvignon 2014.  The Family Series pays homage to the seven winemakers in the family.  The wine is estate grown and they have three properties in the North Coast/Sonoma County area.  This wine was eighty-six percent Cabernet Sauvignon with the balance being Malbec, Merlot and Petit Verdot.  There were seven-thousand cases produced.  This wine reminded me of an Old-World Claret in the best-case description.  This wine I might add is also very affordable, especially for the quality that it displayed.  I was very happy with this wine and I could have gone for seconds on it, it was that good.