An Afternoon with Scott Young

Posted on April 15, 2018 by thewineraconteur

Scott Young is the winegrower and the winemaker for Young Inglewood Wines in Saint Helena, Napa Valley, California.  I had the good fortune to meet and taste his wines at Fine Wine Source in Livonia, Michigan.  Fine Wine Source is one of the wine shops that I have been spending time at for tastings and shopping as the selection is well chosen and they don’t try to be an everything wine shop, as the name implies.  You won’t find the wines that are available at the mass market venues, party stores and grocery stores as they are not after that business.  The owner of the shop also has a wonderful restaurant in Downtown Detroit called Vertical that his daughter runs. 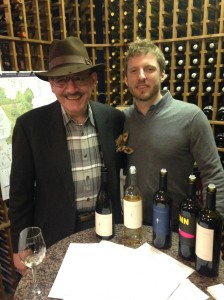 Young Inglewood is a small boutique winery in Napa Valley and they produce around a thousand cases of wine each year.  It is a family run business founded by Jacky and Jim Young, who loved French wines and wanted to produce their own style in their winery.  The winery grows five Bordeaux varietals; Cabernet Sauvignon, Cabernet Franc, Merlot, Petit Verdot and Malbec.  Scott Young was a very passionate young man who has the heavy burden of overseeing the winery as winegrower and winemaker.  I would also be remiss if I didn’t mention his sister Mary, who is a musician and handles special projects for the winery.  The wine tasting was done in a very casual manner, almost reminding me of a tasting at a winery, as there were people coming in at different times, so the wines even though they were poured in a certain progression, Scott was able to make sure that every one tasted the wines thoroughly while discussing the wines, even repeating some of the information for some that came in after I did, and it was enjoyable to glean extra information that wasn’t mention the first time around.  The winery itself is located in St. Helena and was originally part of Rancho Carne Humana, a Mexican government land grant that stretched from what is now Rutherford north to Calistoga, and vineyards were planted there in the late 1870’s, continuously except for the Prohibition era.  Almost the entire wine selection was estate grown. 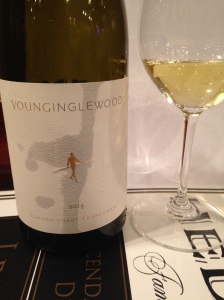 With such a limited production, the first wine that was poured was the Young Inglewood Michael Mara Vineyard Chardonnay, Sonoma Coast 2014.  Scott was surprised that I knew this exact wine and I had wrote about it.  This is the one wine that is not estate grown, and in fact if you noticed, it is not even from Napa Valley, but from the Sonoma Coast.  Scott claims that Steve Mathieson of Michael Mara Vineyards is his wine mentor and he have a dedicated area that his fruit is harvested from each year, because of the friendship.  The hand-harvested clusters were gently pressed whole overnight and two-thirds of the juice was aged in French Oak, and one-third in Stainless Steel. The juice was aged Sur Lie for sixteen months without racking, fining or filtering. Only twenty-five cases of this wine were produced. This wine had a great nose, too bad that every Chardonnay wine does not, a beautiful light gold color, decent legs and a long finish.  This wine was sold out at the winery and there were only a few cases available at Fine Wine Source.  I was really looking forward to the rest of the tasting.

A non-technical wine writer, who enjoys the moment with the wine, as much as the wine. Twitter.com/WineRaconteur Instagram/thewineraconteur Facebook/ The Wine Raconteur
View all posts by thewineraconteur →
This entry was posted in Wine and tagged California, Chardonnay, Michael Mara Vineyard, Sonoma Coast, Young Inglewood. Bookmark the permalink.