Posted on April 11, 2018 by thewineraconteur

It has been awhile since we have heard from Ms. Yoga about her adventures with wine.  She has been busy doing that cursed endeavor known as work.  She lives out of a suitcase quite a bit these days, so it is a good thing that her son is off at college.  We hear from her quite often, but not about wine, unless she really finds something intriguing.  One of the wines that she sent me a photo of was a wine that I had just recently had and wrote about when we were in Las Vegas, namely Orin Swift Mannequin Chardonnay, so I do pay attention when she tells me about something that she is impressed with.

The first was what she texted me as “blog worthy” so I paid attention to the photo.  She gave me no background material about where she was and considering that she has The Wine Raconteur on her phone, you would think that it would have been of assistance for me and my ramblings.  The first wine is Raats Family Cabernet Franc 2014.  Raats Family Wines specialize in Cabernet Franc and Chenin Blanc down in Stellenbosch, in the Western Cape province of South Africa.  The winery grows their 18-25-year-old vines on trellises with no irrigation on decomposed Dolomite granite, which I am sure adds to the terroir of the wine.  They are in no rush for a winery that only produces two wines, as this wine is aged for eighteen months in French Oak, of which twenty-five percent is new, which I am sure would allow the granite to hold its own against the neutral barrels.  She said that this was the best Cabernet Franc wine she had ever had, and she knew that my Bride is very partial to this grape. 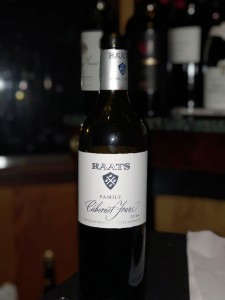 The second wine that she sent for me to admire, and you may notice that she did not send us the wine, was when she was having dinner at the Capital Grille in Washington D.C., one of her favorite restaurants, and when she is up here, she makes it a point to at least have lunch there.  The wine she was raving about was Conn Creek Anthology Cabernet Sauvignon Napa Valley 2013.  She should rave about this wine, as it is the flagship of the winery.  In 1973, Bill and Kathy Collins started to make Bordeaux style wines in Napa Valley.  In 1979, they built Conn Creek Winery in Rutherford, and they were one of the first “green” wineries back then, they were pioneers both in the wine and the conservation.  You will notice that the wine has a name “Anthology” and it also says Cabernet Sauvignon, and while it is eighty-eight percent Cabernet Sauvignon, the balance shows their Bordeaux beliefs as it is Cabernet Franc, Malbec and just a wee amount of Petite Verdot.  This wine was aged in fifty percent new French Oak, five percent new American Oak and the balance in neutral barrels.  I can readily understand how she could get enthusiastic about this wine, and yes, Ms. Yoga we miss you and look for your next time here.