Posted on March 16, 2018 by thewineraconteur

“A hot dog at the ballpark is better than steak at the Ritz.” – Humphrey Bogart

Those are the words that greets you on the window as you approach Echo & Rig Butcher and Steakhouse at Tivoli Village, and from the time that we started making plans to go to Las Vegas again, there was constant mention of the brunch there.  I just wouldn’t be a good trip without it.  The whole main floor of the restaurant is a bar and a butcher shop that sells prime cuts of meat and they also age the meats in house.  It is much different than any other butcher shop that I have ever encountered.  The restaurant is located on the second floor and they also have a beautiful porch overlooking the town square of Tivoli Village, and that is where we decided to dine.  Even though it was a bit chilly, especially for Las Vegas, we have that Michigan blood, plus the overhead heaters and the portable gas heaters really helped as well.

We debated as to whether we were going to try something new, but we both succumbed to our tried and true favorites.  We did opt for something new that we shared before our main dishes arrived.  We split an order of Maryland Blue Crab Cake with a red pepper coulis and fresh limes.  My Bride started to waver but stuck with her original choice of Blueberry Buttermilk pancakes with house made Blueberry syrup. I naturally went big time and chose their featured item on the menu and how could I resist since it was a butcher shop as well as a restaurant. I had Short Ribs Hash and I love Short Ribs and these were Prime, with Yukon Gold potatoes, Bell peppers, Shallots, two Poached eggs and Smoked Hollandaise Sauce.  We did do some sharing and afterwards there was no room for any of the desserts that they were offering that morning.  Our appetites are not as large as they once were, but we were totally happy. 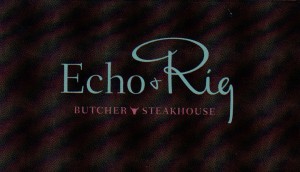 Now as for the “bottomless Mimosas” they were true to their word, as the wine goblet was filled as often as the water glass. The fresh orange juice must be dearer than the sparkling wine, because the juice was brought out in a small carafe for us to pour, while the sparkling wine was almost filling the goblet. The first time that we were there we had this wine, I had never heard of the wine that was being poured, but since then I have noticed other restaurants back home touting the same wine for their Mimosas. Wycliff Brut California Champagne is by the William Wycliff Winery which is under the umbrella of the Gallo Winery group. This screwcap bottle of sparkling wine is geared strictly to restaurants and catering companies, so that the consumer cannot check the retail price of the wine or buy it on their own. Since it is part of Gallo, I am sure that they have made sure that they were grandfathered in with the term “California Champagne.” This wine is made by the Charmat Method, which is a more economical way of producing a sparkling wine and since it was being mixed with orange juice, it was more than adequate. Traditionally the wine would be made with Pinot Noir, Chardonnay and Pinot Meunier and I will presume that all or part of those grapes are being used. All I can say is that it was a great way to start the day off.  The only thing lacking was the screw cap, instead of the classic pop of a cork, but it was still a great way to start the day.

A non-technical wine writer, who enjoys the moment with the wine, as much as the wine. Twitter.com/WineRaconteur Instagram/thewineraconteur Facebook/ The Wine Raconteur
View all posts by thewineraconteur →
This entry was posted in Dining, Wine and tagged Brut, California, California Champagne, Chardonnay, Charmat Method, Gallo Family Vineyards, Pinot Meunier, Pinot Noir, William Wycliff Winery. Bookmark the permalink.

2 Responses to Brunch at Echo & Rig