Posted on February 18, 2018 by thewineraconteur

I had some errands to take care of, as it has been a hectic couple of weeks and I thought I would stop by The Fine Wine Source in Livonia to take a look around. I immediately greeted the owner and the next thing I knew I had a wine glass in my hand, after he bent my arm a bit to coax me. I was taken over to a barrel sitting amid walls of wine and they began a tasting on the spot. They use the Coravin system to pour samples without opening a bottle of wine, and they use this same system at the restaurant he and his daughter have in downtown Detroit called Vertical that I have wrote about and the fine dinner and wines that we had there. To be quite candid, it was the first time that I had actually seen the device being used, though I knew of it, and have seen it.

I started off with a glass of Montaudon Brut Champagne NV from Reims, France. This Champagne house was founded in 1891, so they have been around for a few years. The wine is a blend of forty percent Pinot Noir, thirty-five percent Pinot Meunier and the balance is Chardonnay. The wine had a nice soft floral nose with a decent finish to it, and I found it quite refreshing as it was not as Brut, as some Champagnes are, so there was a dash of sweetness to it. A great way to start the day. 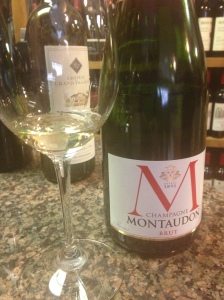 The second wine that I was offered was also a white wine an it was from Les Heritiers du Comte Lafon which was founded in 1999 and they are biodynamic and organic from single sites and they shun the normal Maconnais way of high volume, industrial farming. The Lafon Macon-Milly-Lamartine 2015 was charming. The white wines that carry the Macon-Milly-Lamartine designation must be Chardonnay, otherwise it would carry the lower designation of Macon. This wine is aged for seven to eight months on the lees in larger, older oaken barrels and then gently racked before bottling. The wine had a terroir-driven nose and taste of limestone to me and a nice finish. The kind of Chardonnay that I really enjoy. The afternoon was starting off properly.

A non-technical wine writer, who enjoys the moment with the wine, as much as the wine. Twitter.com/WineRaconteur Instagram/thewineraconteur Facebook/ The Wine Raconteur
View all posts by thewineraconteur →
This entry was posted in Wine and tagged Brut, Champagne, Chardonnay, France, Les Heritiers du Comte Lafon, Macon-Milly-Lamartine, Maconnaise, Montaudon, Pinot Meunier, Pinot Noir, Reims. Bookmark the permalink.