Posted on January 11, 2018 by thewineraconteur

I normally only write about wines that I have actually tried, as I think that is only proper. On occasion I will mention some wines from others, because I respect their wine choices, as we have actually been out with them for dinner and beverages. Ms. Yoga has been friends with my Bride, prior to my even meeting my Bride. In fact, we have been to Napa for a week with her, so I can appreciate when she sends me messages about wines that she has enjoyed, as I know that she won’t bother with wines that she thinks I will not like. 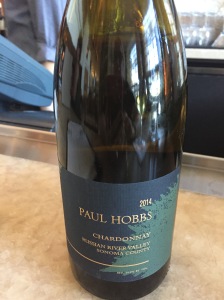 The first wine that she sent me, she must have been out for dinner, there was no background information, just the wine. The Paul Hobbs Russian River Chardonnay 2014 really floated her boat, as I know that she is vary partial to good Chardonnay wines. The Russian River district in Sonoma County has been heralded as one of the best and Paul Hobbs has a history of making fine wines. This is a wine that was aged Sur Lies and was produced unrefined and unfiltered. The wine spent four months in Stainless Steel and twelve months in French Oak, of which half were new. It is a wine that I will keep on my radar when we are out. 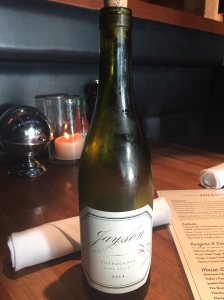 The other wine that she gave me a shout out for was Jayson Chardonnay Napa Valley 2014.  Jayson is the second label for the very well respected Pahlmeyer wine group.  The fruit was harvested not only from the Pahlmeyer Estate, but also from Atlas Peak and the Wayfarer Estate.  This Chardonnay wine was also produced using the Sur Lie method and was aged for eleven months in eighty-five percent new French Oak.  So, Ms. Yoga is two for two on a couple of fine wines, and we look forward to the next time we see and enjoy her company.

A non-technical wine writer, who enjoys the moment with the wine, as much as the wine. Twitter.com/WineRaconteur Instagram/thewineraconteur Facebook/ The Wine Raconteur
View all posts by thewineraconteur →
This entry was posted in Wine and tagged Atlas Peak, California, Chardonnay, Jayson, Napa Valley, Pahlmeyer, Paul Hobbs, Russian River Valley, Sonoma County, Wayfarer Estate. Bookmark the permalink.

2 Responses to Two from Ms. Yoga