Posted on November 26, 2017 by thewineraconteur

They say that the busiest night of the year in the restaurant trade is the night before Thanksgiving. Most people that are traveling to a destination for the holiday have arrived and since the majority will be cooking that Thursday, everyone wants to have a respite from the kitchen the night before and spend the time with family and guests. I guess we were no different, as the Kentucky clan were up, there was a group of us celebrating the event as well as their wedding anniversary and the birthdays of their two twins, a “two-for” as they say. 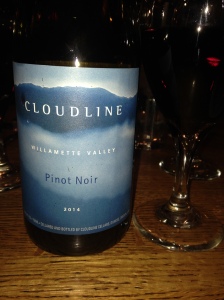 They wanted to go someplace different for the evening and asked us to select a venue and we chose Rocky’s of Northville, a place that we have been to often, as it is not far from our home and the hotel where they were staying. Rocky’s is a stand-alone building that looks a little out of the way for the area, as it looks like it should be up-north in Michigan. There is a full grown stuffed bear in a glass cabinet, plus lots of trophy games mounted on the walls. The menu is wide enough to sate most diners. We started off the meal by just ordering plates of fried Calamari with roasted Garlic, Capers, Pepper Rings and Provencal Sauce as well as some plates of Shrimp and Crab Cakes with Pineapple Salsa and Chili Aioli as well as some Fried Brussel Sprouts with a Balsamic glaze and Bleu Cheese. I won’t mention all of the dishes ordered, but my Bride had the Pan Roasted Monk Fish with White Pepper Mashed Potatoes, Asparagus and Herb Tomato Butter. I had a mental debate between the Braised Short Ribs and Roast Duck. Since I knew what the next day’s menu was at the house I went with the Maple Leaf Roasted Duck with Spätzle, braised cabbage, vegetables and a Cranberry-Orange relish.

The beverage part of the meal has to be included, as Man does not live by water alone. We started off with a bottle of St. Francis Chardonnay 2014. This is a Chardonnay from both estate and non-estate vineyards in Sonoma Valley, Russian River Valley, Carneros and Alexander Valley, so hence it carries a Sonoma County AVA. The wine is ninety-six percent  Chardonnay with a touch of Viognier, Marsanne and Roussanne and it aged for six months in French Oak. This wine worked very easily with the first part of the meal. The other wine we had was from Dreyfus, Ashby & Co., namely their Cloudline Pinot Noir 2014. This is a Pinot Noir from Willamette Valley and this was the first year that they used twenty-five percent of the fruit from the Rose Rock Vineyard. The wine I thought had good color, but the nose and the body were on the light side from what I expected and but it still worked well for the entrees chosen. It was a fine way to start the long holiday weekend.