Posted on August 20, 2017 by thewineraconteur

Bel Lago Vineyards is another Michigan winery in the Leelanau Peninsula and in Italian it means “beautiful lake” and that is what Lake Leelanau is. The winery was founded in 1987, but there had been vines planted back in the 1980’s. They own thirty-seven acres and there are over one hundred varieties planted including Pinot Grigio, Chardonnay, Cabernet Franc, Pinot Noir, Gewurztraminer and Riesling. They have also planted some Cold Hardy grapes like Auxerrois, Siegerrrebe and Cayuga White. The winery offered twenty-two wines and five ciders when we were there. 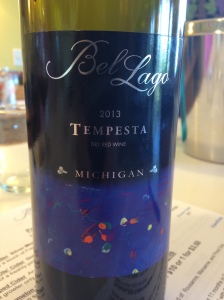 The winery produces anywhere from 17-20.000 cases of wine per year, but not all the wine that is produced carries the Leelanau Peninsula AVA, because not all is Estate Grown, and some of the wines carry a Michigan AVA and I even tried one that had an American AVA. The Auxerrois “Lot 1514” is a multi-vintage blend in neutral oak barrels, aged just long enough to maintain the fruitiness of the Auxerrois and some of the fruit was brought in from Washington State. Also in the white wines, we tried their Pinot Grigio 2014 which was aged Sur Lie in Stainless Steel and it was a good everyday Pinot Grigio. The Pinot Grigio & Chardonnay NV had a little more body from the added Chardonnay grapes and was easy to drink. I found the Semi-Dry Riesling 2015 to have a sweeter aftertaste than I expected from a Semi-Dry.

The two reserve red wines that we tried were much better, but they both carried the Michigan AVA designation. The Cabernet Franc 2013 was aged for thirty-six months in French Oak and had some body and heft, but as my Bride pointed out, the Cabernet Francs that we had encountered in the Niagara-on-the-Lake area of Ontario, Canada far exceeded this wine. The other wine that we tried was their flagship wine Tempesta 2013 which was predominately Cabernet Franc blended with Merlot, Regent, Lemberger and Marquette which was aged for thirty-two months in a mix of French and American Oak barrels. I thought this wine had the most personality and the Cabernet Franc did carry this wine.

A non-technical wine writer, who enjoys the moment with the wine, as much as the wine. Twitter.com/WineRaconteur Instagram/thewineraconteur Facebook/ The Wine Raconteur
View all posts by thewineraconteur →
This entry was posted in Wine and tagged Auxerrois, Bel Lago Vineyards, Cabernet Franc, Chardonnay, Leelanau Peninsula, Lemberger, Lot 1514, Marquette, Merlot, Michigan, Pinot Grigio, Regent, Riesling. Bookmark the permalink.