We finally left Marquette and had to drive to Bay City, Michigan to attend a board meeting. Bay City has had its ups and downs over the years, but they definitely seem to be on the rise and that is great. The city is located on the water and there are hydraulic bridges that continue to operate to allow the boats to enter and the downtown area is also on the rise, as there were more storefronts open compared to the last time we were there. The night before the meeting we were treated to dinner by an old friend of my Bride and someone that I now consider to be my friend as well and there were three others that were invited as well.

We met at the Old City Hall, a restaurant that my Bride and I have been to before and I have discussed in the past. The name Old City Hall is fitting, because the building at one time was the original city hall of Bay City and at times was also the courthouse and the police station. The restaurant has a nice bar, craft beers and a nice wine list, as well as a menu that would please most people with very able people in the kitchen. I won’t get into the details of everyone’s dinner, but we did start off with a few appetizers that were shared among us. We enjoyed Beef Tenderloin skewers with candied ginger and Sriracha sauce, and a platter of Calamari sliced very thin and flash fried done with a Szechuan sauce; as a side note, this is a dish that I am often hesitant to try, because so many places over cook it and it becomes rubbery and this was not the case. My Bride had for dinner Red Curried Chicken with crisp green beans served atop Basmati rice and she was in heaven. While I had a dish of Beef Medallions with Beurre Blanc wild mushroom demi-glace, garlic mashed potatoes and the traditional summer medley of vegetables, that my Bride unabashedly liberated the vegetables that I am not partial to. This was just a small representation of the dishes and they were all seasoned differently, so everyone was very happy with their choices. 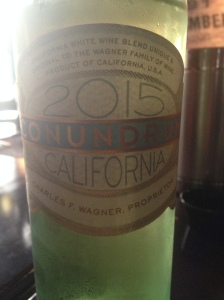 We walked over a little earlier from the hotel and were promptly seated at the reserved table. We decided that since we were going to be guests that the least we could do, was buy the first bottle of wine and since I knew that our host was partial to Chardonnay, I paid special attention to the Chards on the carte. I chose the Laguna Russian River Chardonnay 2014 and we were both immediately impressed with the wine. This wine came from the Laguna Ranch Vineyard which like the wine is owned by the parent company of E&J Gallo Winery, which when I was a kid learning about wines, was basically a jug wine company, but they have certainly expanded the scope of their wine making. This wine was lovely and when we finished the first bottle, everybody wanted another bottle, and when that was finished, we were all upset to find out that we had depleted the inventory of this wine. The third bottle that we ordered would normally be a fine wine that nobody would complain about, but it paled in comparison to the Laguna. The third bottle was Conundrum White by Caymus 2015, an excellent proprietary blend under the auspices of Charles Wagner. The wine carries a California AVA, because the fruit is harvested from Napa, Monterey, Santa Barbara and Tulare Counties. The wine is a blend of Chardonnay, Sauvignon Blanc, Semillon, Muscat Canelli and Viognier, but the percentages are a secret. As a rule, this wine would have made everyone happy as it normally does, but after following the Laguna, I have to say that Gallo topped Wagner that evening. We all left full and sated as we proceeded to walk back to the hotel.