While we were in Marquette, Michigan we were trying to find out about some restaurants that we haven’t tried and we were walking around the downtown area. There was a restaurant that we had enjoyed called L’Attitudes, but it had closed and we had heard that there was a “Mexican” restaurant on the second floor above where L’Attitudes had been. When we got there, we found that the restaurant was open on the main floor and owned by at least one of the partners from the old L’Attitudes. The new restaurant was Iron Bay Restaurant & Drinkery and there really wasn’t much change to the room that I could remember outside of now they had large photographs of the building and the area during the heydays of Marquette and the iron ore business days. 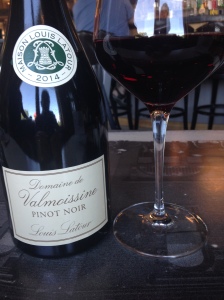 The conceit of the business had changed though, it was now more comfort food and beer oriented, as opposed to the more daring food and wine from the last establishment. We were there and decided to try them out for dinner and we had a nice table over-looking the marina and waterfront just across the street. My Bride decided on the Asian Chicken salad with seasonal greens, dried Michigan cherries, cashews, grated cheese, Chow Mein noodles and a Sesame Ginger dressing. I went with some old-fashioned comfort food and chose their Meatloaf Tower with mashed potatoes, gravy and fried onion strings. Half way through our dinner, I did notice that the restaurant was really filling up, considering that it was brand new and the people at the front desk at our hotel were not even aware that Iron Bay was open. 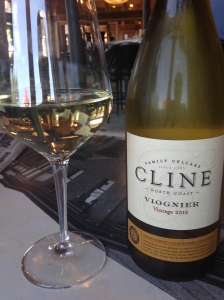 While beer was the featured beverage, they did have some wines for us to choose from. My Bride went with the Cline Family Cellars Viognier 2015 from the North Coast of California. The North Coast AVA is one of the largest in the country and some of the sub-regions are Napa, Sonoma and Mendocino Counties; there are actually eight sub-regions in the North Coast. The Viognier was a nice crisp wine with some of the perfume that I expect and I will go out on a limb and presume that it was aged in Stainless Steel, because of the crispness and it worked well with her salad. I chose the Louis Latour Domaine de Valmoissine Pinot Noir IGP Var 2014. The IGP Var is a relatively new status and pertains to Argens, Sainte-Baume and Coteaux du Verdon; it replaced the old Vin du Pays for the Southern coast of France. This was a much lighter Pinot Noir as it was aged or ten to twelve months in Stainless Steel and with a meatloaf dinner it was fine.