Dress Up Wine Down

Sean Connery and Jill St. John were the stars of Diamonds are Forever, one of the original James Bond movies and the theme for Dress Up Wine Down. To me if one was to attend a charity event with a glamorous theme like that, you would think that all the men would be in classic dinner jackets or at the least in tuxedoes, but at least most of them were in suits. Your kindly old Raconteur probably channeled Richard Blaine (though a bit more colorful), more than 007, but one would have to know their movies to pick up on that.

The event was to raise money for the Center for Rehabilitation of Henry Ford Wyandotte Hospital Patients. The featured event was a fashion show of both men and women’s attire and the models were either doctors or noted business people from the city of Wyandotte, plus there was also Miss Michigan modeling for the women. Like most events of this nature there was a silent auction of goods that were donated. The hall was donating the catering and they had set up strolling buffet tables of dishes, which is not my preferred method of eating. I always eat beforehand, because it always appears that people try to load up their plates with enough food to cover the cost of the entrance, as the tables were mobbed, but that is to be expected; and I just have a phobia about buffet lines anyways. There was a beautiful sweet table set up as well and that was done by another benefactor. After the crowds had diminished I went and grabbed some cheese and crackers to accompany my drinks of choice.

By the time, I got there I had missed the “champagne reception” so I am not sure what was being poured, and there was a cash bar, but I waited until they opened up the wine tables and there was a selection of wines that were also donated for the affair. I believe that they had two different white wines and two different red wines and I tried one from each category, for research (of course). The more interesting of the two white wines was the popular priced Cupcake Vineyards Monterey County 2015, as I normally see the Cupcake Vineyard Chardonnay with a Central Coast AVA, which would also encompass the Monterey County. I really couldn’t find anything more about this wine in regards to the production, but I have had the Central Coast versions before and I was hoping for something a bit dryer, but the winemaker prefers to keep his fruit-forward image in place; and with the cheese and crackers it was fine. The red wine was Columbia Crest Grand Estates Red Blend 2011 from the Columbia Valley in Washington State. This wine was a blend of Merlot, Syrah, Cabernet Franc, Cabernet Sauvignon and the proprietor’s “others” that were aged in French and California Oak for sixteen months. The wine surprised me that it was a bit more fruit-forward as I expected a bit more dryer of a wine, but it went down easily enough. I did notice that the wine table was finished before the food and sweet tables were. All in all, it was a fine affair and I am sure that the objective of raising money for the hospital was a success. 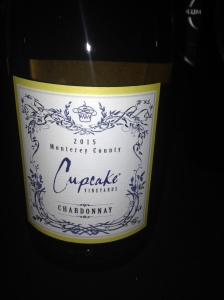 2 Responses to Dress Up Wine Down