Posted on April 22, 2017 by thewineraconteur

By the time this article publishes, the majority of the people that have tickets for the premier night showing of The Promise will just be reading some words of William Saroyan at the end of the movie, before the credits roll by. I am not a movie critic by any stretch of the imagination, though I have been a film student forever, but then most people are on the fence as to whether I am a wine critic as well. Kirk Kerkorian, the late philanthropist left money to have this film made and a fine job it was.  The premier of the film is trying to coincide with April 24, the hundred and two year anniversary of the Armenian Genocide and I guess one can say one hundred and two years of denial.  Some of the panoramic views of Constantinople and of the villages that later became under the French auspices of Cilicie after World War One were stunning.  The images of how men can be so evil to others permeates the story, and there was one scene that evoked comparisons to Kristalnacht or “The Night of Broken Glass” that began the genocide of the Jews in Germany prior to World War Two.  The viewer is left to interpret their own versions of the inhumanity that they are witnessing as well as the eternal spirit of courage and love by those down-trodden who really cannot believe what has befallen.  The movie even intertwines the story of Musa Dagh, the book and the eventual film, which were both forced out of existence by Turkey, could not force this film from being issued; and as an aside it was even mentioned by Zorba in the book version. As of 20 April 2017, the movie site IMDB.com has had 126,497 rating votes for a film that has been perhaps seen six or eight times in film festivals so far, and the majority were all negative “one” votes out of a possible “ten,” which I find interesting and appalling. I really cannot state the story line, as I am still rather choked up, as I know that both of my grandparents survived those days. If you have a chance I would strongly recommend that you see this film, as the one line of dialogue is still ringing in my ears “Our revenge will be to survive.”

We tried to get our tickets for the premier evening as one of the musicians that will be performing here before the film, I grew up with. We could not seem to secure any tickets, but then when I kept checking I saw that the original Cineplex that was going to show the film had added more nights, and the one night was prior to the premier. We also bought my sister a ticket for the movie as an Easter present and we took her out to dinner before the show as well. The weather was so bad that we decided to eat at one of the restaurants in the mall that is adjacent to the Cineplex. My Bride and my Sister shared an appetizer and a Chinese Chicken Salad that both of them enjoyed, as I have written about the menu at California Pizza before, and I had the Jambalaya Fettucine. 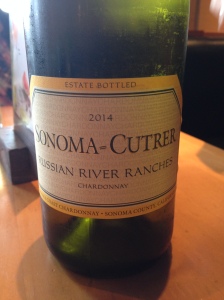 My Sister only wanted to drink a non-alcoholic cocktail and my Bride and I both opted for a glass of wine. We went with something on the lighter side as neither of us wanted to have anything too heavy. My Bride had a glass of Sonoma-Cutrer Russian River Ranches Chardonnay 2014. The Russian River Ranches is part of the much larger Sonoma County and as one can guess Sonoma-Cutrer is heavy into Sonoma country. A delightful wine with enough taste to take it way beyond the normal Chardonnay wines that one finds in California and we have had this wine often over the years and my Bride had the better of the two wines of the evening. I had a split of Le Grand Courtage Blanc de Blancs Brut NV with a screw cap for a sparkling wine. This wine comes from the Nuits St. George district of Burgundy and is a Stainless Steel fermented blend of Chardonnay, Chenin Blanc, Colombard and Ugni Blanc. There was ever so slight tinge of effervescence, but it was easy to drink and did not battle with the spices and mélange of food in my Jambalaya. I have to say that the food and the wine took a back seat today to the movie, and it is still haunting me, as I write.

“I should like to see any power of the world destroy this race, this small tribe of unimportant people, whose wars have all been fought and lost, whose structures have crumbled, literature is unread, music is unheard, and prayers are no more answered. Go ahead, destroy Armenia . See if you can do it. Send them into the desert without bread or water. Burn their homes and churches. Then see if they will not laugh, sing and pray again. For when two of them meet anywhere in the world, see if they will not create a New Armenia.”

5 Responses to The Promise