Posted on January 22, 2017 by thewineraconteur

We recently had a chance to have dinner with our Son and his wife and we tried to choose a location that was between us geographically. We chose Vinsetta Grill and all we met there from our different routes. They did not take reservations, so we thought that we would try to get there early, so to get a table. I guess we got there right at the opportune moment, because afterwards there was an unbelievable line up of patrons, which is always a good sign. 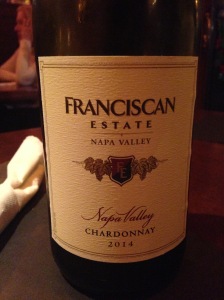 Since we got there early we decided to order an appetizer to go with our first round of wine and we went with their house specialty which was an Onion Loaf. We weren’t sure what to expect but it was a large stack of crispy onion rings in the shape of a loaf of bread, which we started to munch on, and almost after it arrived, so did our Son and his wife. Our Daughter-in-Law opted for a “Build Your Own” burger in a bowl, and my Bride ordered the same concept, but on a Brioche. Our Son opted for the French Dip and I order a slab of Baby Back Ribs. Since we don’t make ribs at the house, I thought it sounded like the best option, after I was assured that the meat falls off of the bone, and yes, I am sure that I am considered a pain in the arse for always questioning how the ribs are made. Afterwards our Son had a slab of Chocolate Cake and his wife had a slab of Carrot Cake, and as for my Bride and I we shared a Hot Fudge Cream Puff, as neither of us needed a whole dessert. 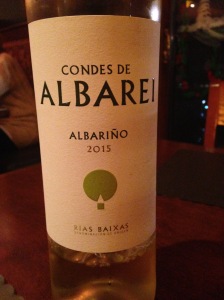 My Bride and I were the only ones to have some wine, so we just ordered by the glass, as we didn’t want to take another bottle of wine home with us. My Bride had the Bodegas Condes de Alberei Albarino 2015 which was delicious. This wine is from the Rias Baixas region of Galicia in Spain, and to carry the Rias Baixas designation the wine had to be at least seventy percent Albarino, but this wine was entirely Albarino. I had the Franciscan Estate Chardonnay 2014 from Napa Valley. Franciscan Estate began in 1975 and was originally Franciscan Oakville Estate and that is how I knew it. This wine was aged for seven months Sur Lie in small French and American barrels. Franciscan Estate was the first winery to produce wild yeast-fermented Chardonnay in Napa Valley. It was a good wine, but not as oaky as I had hoped it would be and the Albarino would have been better that evening with my ribs, otherwise it was fine.