Posted on December 21, 2016 by thewineraconteur

My Bride is a volunteer, she always seems to be volunteering; I sometimes think it is so that she can get away from me. As if being a Mother, a Grandmother, a Godmother, an Aunt and a Bride is not enough to do when she isn’t working. She keeps picking up these  gift requests both from work and from her Church, so that others can have a nice Christmas as well; she does have a big heart. There are days when I feel that I am becoming a bachelor, she does so many different things at her Church. One of the groups had a Christmas dinner and spouses were invited. 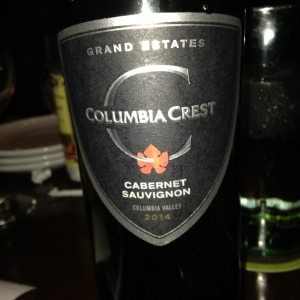 We were going to the Olive Garden, and we did not pick the venue. As I have said before, I am not a fan of chain restaurants and this evening did not change my attitude, but the food was fine. We were having a party of twenty and they could have put one more table in the row, as I think that I have had more space in an airline seat and my seat was at the seam of two tables that were not the same height, so I had to be careful where I placed my plate. We started off with a salad that was brought out family style and after asking for some additional peppers, it was enjoyable.  My Bride had the Jumbo Shrimp and Lobster Ravioli and I had basically the same dish, but with a small sirloin steak and it was cooked Medium Rare, so they did get that right. I figured that the less “Italian” the meal, the safer it would be for me, and I think that I called it right. Their idea of Jumbo Shrimp and mine though were miles apart, I have had larger shrimp in a Shrimp Cocktail and may I opine that there was a shortage of the Jumbo Shrimp, and yes, I know that it is one of the more popular examples of an oxymoron. Around my seat, I was surrounded by women and I had a chance to regale them with stories about old Detroit, and it turns out that one of the women came from my old neighborhood, so it was great reliving some of the old haunts that are no longer here. The Raconteur was at full speed with the stories to keep the ladies entertained.

The high point of the meal, beyond my storytelling was the bottle of wine and it was not Italian. When I looked at the wine list, most of the wines were popular priced and that made sense and then there were two bottles of wine that were at least twice the price of the other wines, and I am not sure how many bottles they would actually sell of an Amarone or a Brunello. I stayed safe and ordered a Cabernet Sauvignon and one did not have to worry about the any flourish of service with the wine, as our waitress, opened the bottle and just poured out two glasses for my Bride and I and took off. I saw the wine on the carte and I wanted to try a bottle of it as it was listed by Wine Spectator as a “Best Value” with a score of 91 points. The wine was Columbia Crest Grand Estates Cabernet Sauvignon 2014 from the Columbia Valley in eastern Washington state. I have had wines from this winery before, but I wanted to see if I agreed with their evaluation. The wine is 80% Cabernet Sauvignon, 18% Merlot and 2% Cabernet Franc and was aged in older American and French Oak for eleven months. The first sip was not impressive, but after the wine had a chance to breathe and open up, it was very pleasant and I would order this wine again without hesitation. In fact, we did finish the bottle during the dinner, I guess story telling made me thirsty.

A non-technical wine writer, who enjoys the moment with the wine, as much as the wine. Twitter.com/WineRaconteur Instagram/thewineraconteur Facebook/ The Wine Raconteur
View all posts by thewineraconteur →
This entry was posted in Dining, Wine and tagged Cabernet Franc, Cabernet Sauvignon, Columbia Crest Grand Estates, Columbia Valley, Merlot, Washington. Bookmark the permalink.