Posted on September 30, 2016 by thewineraconteur

It looks like I will not run out of wines to discuss, but three more have just entered into potential articles. I just opened up my latest shipment from my wine club “A Taste of Monterey.” I can’t even tell you for sure how long we have been receiving wine from this club, but it has been a very long time. We discovered the shop on our first trip to the city of Monterey, as we were going to have dinner at the famed restaurant The Sardine Factory. We spent the day in Monterey, tasting some wines and buying even more wines, had a stellar meal and we even bought a work of art. Let it suffice to say that on that first trip for holidays at Carmel-by-the-Sea we probably spent more money than we had allotted for, but some times that happens. 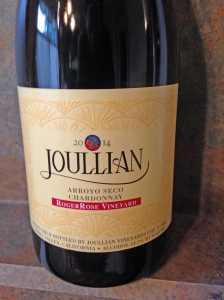 The first wine that I pulled out of the shipping carton was a new winery for me. The Joullian Roger Rose Chardonnay 2014 from Joullian Vineyards Ltd. and the fruit came from the Roger Rose Vineyard in the Arroyo Secco AVA. The fruit is actually from Dijon Chardonnay clones and since the vines are twenty to forty years old they survived the drought year of 2014. They have strove to maintain the concept of a Burgundy Chardonnay by using French Oak that has been cured for three years to minimize the oakiness that could occur. There were one-hundred-twenty-five cases made of this wine and the aging potential is six to seven years.

The second bottle that I unpacked was from Scheid Vineyards of Greenfield, California. I have received one other bottle from this winery their Scheid Hames Valley Vineyard Petite Sirah 2009. The wine that I just received is Scheid Cabernet Sauvignon 2012 and it is listed as being Estate Grown from their San Lucas and Hames Valley Vineyards. The wine was barrel aged for twenty month and was bottled unfiltered to preserve the tannin structure. This wine produced six-hundred-fourteen cases and the aging potential is eight to ten years, though it may have the potential to cellar even longer, in my humble opinion.

The last bottle to come out of the carton was Pessagno Pinot Noir Four Boys Vineyard 2013, and I have had their Pessagno Chardonnay Sleepy Hollow Vineyard 2010. The new wine comes from the Santa Lucia Highlands AVA and I cannot say enough about the Pinot Noir wines that I have enjoyed from this area. This wine was made from lightly crushed berries with about forty percent of the berries left whole for fermentation. They used both Burgundian yeast and native yeast cultures and they made this wine Sur Lees and stirred over an eleven month period. There were one-hundred-fifty cases made of this wine with an aging potential of five to six years. Even though I have mentioned the aging potential for all of these wines, I think that they may make an early appearance on our table for Thanksgiving, as I think that they will be perfect for that dinner.