Posted on September 20, 2016 by thewineraconteur

As more and more people came in to honor The Wine Raconteur Jr. on becoming forty, the rooms indoors were filling up quickly and I noticed that the tables under the tents in the back yard were also getting revelers. While they may not have all taken the suggestion about the Sixties dress code, they all wanted to offer their congratulatory salutations. The man has achieved much and he warranted the fuss, and what a to-do there was. I was really feeling for his Bride, as she just seemed to be pulling more and more appetizers out of thin air, it almost seemed for the cocktail party. 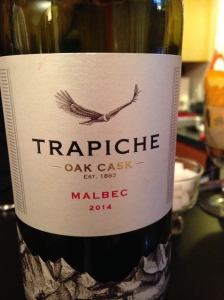 The on-site bartender was really working her magic as she created more and more cocktails, from the initial “Perfect Manhattan” for the Guest of Honor and then on and on for all of the guests. There were about six framed signs featuring the cocktails of the moment, and they were all getting quite a bit of play and requests. There lo and behold among the liquors, beer, syrups and garnishes were three wines for the party as well. 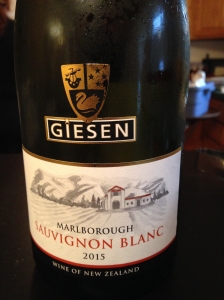 The first wine that I noticed was keeping in the theme of the evening, to a degree. While Lambrusco wines are thought of from the Sixties, it was really at the tail end of the decade, but if you are of a certain age, one can always remember the great advertising campaign for Riunite Lambrusco. There front and center from Emilia-Romagna in Italy was Chiari Lambrusco Dolce Frizzante. This slightly effervescent and sweeter wine made from I am sure a mixture of the sixty some different identified Lambrusco varieties made people smile. This wine carried the Rosso Emilia IGP which covers most of the Lambrusco wines from the region, not to mention any of the newer varietals that are being experimented with by the growers as well.

The second wine that was being featured was from New Zealand, which in reality was not even thought of back in the Sixties as a country for wine. The countries that were thought of for wine back then was France, Italy, Germany, Spain and Portugal; and perhaps there might have been some daring souls that tried wines from the Finger Lakes of New York and some cowboys out west in California. The Giesen Marlborough Sauvignon Blanc 2013 was what one would expect from this region and on such a warm summer evening, it filled the bill most adequately for those drinking wine. Marlborough is the most important wine district in New Zealand and it is almost synonymous with Sauvignon Blanc. 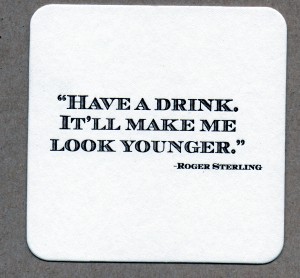 The last wine being served at the bar was from South America, an area that wasn’t even thought about during the Sixties, unless one could dance the Tango or some of the Latin dances that were popular in the night clubs, when night clubs were in vogue, or perchance you knew some one that went to the Carnival. The Trapiche Oak Cask Malbec 2014 is a robust wine from the Mendoza region of Argentina. Malbec is one of the grapes that has taken the area by storm and is recognized almost internationally as a wine to look for from the area. The term Oak Cask or Reserve are both used interchangeably by Trapiche to be their flagship wine collection, depending on the marketing department of the winery. This collection is aged for twelve months in both French and American Oak to round out the wine.

With all of the food and the assortment of beverages, this cocktail party would have been the party of the season even for the jaded members of Sterling, Cooper, Draper and Pryce. I also heard no complaints from the partiers, only compliments for a memorable evening.

A non-technical wine writer, who enjoys the moment with the wine, as much as the wine. Twitter.com/WineRaconteur Instagram/thewineraconteur Facebook/ The Wine Raconteur
View all posts by thewineraconteur →
This entry was posted in Dining, Wine and tagged Argentina, Chiari, Emilia-Romagna, Giesen, Italy, Lambrusco, Malbec, Marlborough, Mendoza, New Zealand, Rosso Emilia IGP, Sauvignon Blanc, Trapiche. Bookmark the permalink.