A little while ago, when my Favorite Daughter was in town, we ate at Oesteria 222, and years back I ate at the same location when it was called Alfresco. I was working right across the street from the restaurant, so there were some days depending on my schedule where I might jay walk twice in one day to eat there. I am a creature of habit and when I find some place that I enjoy; I just become a regular. I also liked the fact, that I could have one of the tables near the window, and if the store needed me, they could just step out into the lobby and wave, after all this was before cell phones. I may not have had to punch a time clock, but I did have to let them know where I would be, while I was out; and I guess that was fair. 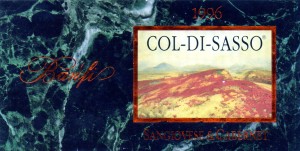 Alfresco was one of those charming store front eateries where everything was homemade from the owner’s Mother’s recipes. Everything was always fresh, and the staff would always tout me on any specials, and sometimes the specials would not even be on the menu. The soups were great, even the house salads were great, and I am not much of a salad eater. They had individual pizzas, and stuffed pizzas and they could all be modified per request. There were also several different pasta dishes to choose from, so I was never bored with the selections, even though I ate there quite often. 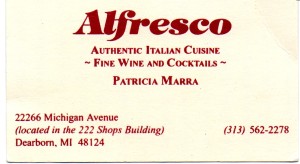 I would even indulge in a glass of wine for dinner, but not normally for lunch. The wine selection was only about ten choices, with perhaps another six by the bottle, so that was plenty for the type of operation that was there. I thought the wine selection was good and complimented the menu, and they were all Italian wines. One of the wines that I would usually get was Castello Banfi Col Di Sasso 1996. Castello Banfi was started in 1978, prior to that it was known as Banfi Vintners since 1918 and was once the leading importer of Italian wines to the United States of America. Col di Sasso translates to “Stony Hill” and I might opine that it describe a certain part of the estate. This wine was a blend of Sangiovese and Cabernet, which I find curious. The newer Col di Sasso wines now list themselves as Cabernet Sauvignon and Sangiovese, and they now carry the famous Toscana IGT designation. Back in 1996 there was no designation and any wine that was not all Sangiovese or some of the other native grapes were delegated to Table Wine status, but I am sure that the addition of Cabernet was a great marketing ploy on their part, especially to the American Market. I was sad to see this restaurant close, but I still have a real keepsake from there, as I bought one of the wooden wine racks that they had featured in the restaurant and it is now in my cellar, holding about seven dozen bottles of wine.

A non-technical wine writer, who enjoys the moment with the wine, as much as the wine. Twitter.com/WineRaconteur Instagram/thewineraconteur Facebook/ The Wine Raconteur
View all posts by thewineraconteur →
This entry was posted in Dining, Wine and tagged Cabernet Sauvignon, Castello Banfi, Col di Sasso, Italy, Sangiovese, Toscana IGT. Bookmark the permalink.