I just received my shipment from my wine club “A Taste of Monterey” and the selection is just what I had envisioned the club to be from the start. I had my choice of getting two bottles of wine every month, or three bottles of wine every quarter; and the quarterly shipment were of better wines. My desire from the club was to get some limited production wines from wineries, which I would not be able to secure in Michigan. I hit the jackpot this shipment, as the largest production of any of the wines was less then three-hundred-fifty cases of wine.

The first wine that I grabbed was the Puma Road Reserve Chardonnay 2012. This wine is from the Franscioni family that has been in the Salinas Valley since the 1890’s as farmers. They were in the dairy and the lettuce production and started small growing some grapes. The family produced their first bottle of wine in 2003 under the label of RF Wines. Some years later Puma Road Winery now produces 4,500 cases of wine per year and they now grow fifteen different varietals. Puma Road Winery’s single vineyard Chardonnay is grown on the Vigna Monte Nero Ranch in the Santa Lucia Highlands, which is becoming one of my favorite AVA designations after the many wines that I have tried from the area. The hand harvested fruit is aged for ten months in 40% new French Oak and 60% in neutrals. They produced 122 cases of this wine, so I guess the term “reserve” may mean something here beyond marketing verbiage, and they aging potential for this wine is from five to six years, I will be surprised if it lasts one year in my cellar. 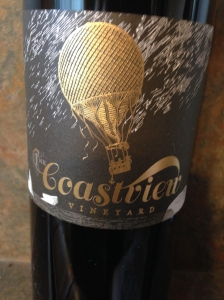 The second bottle is from Coastview Vineyard of Soledad, California. With its label evoking a Jules Verne epic, Coastview Red Wine Cuvee S.A. Andrée 2010 proclaims that only six barrels were produced. Each of their labels reference to a journey or travel, and the Cuvee S. A. Andrée is the Swedish balloonist Salomon August Andrée, who embarked from Svalbard in July of 1897 in a balloon with two companions, scientific equipment, homing pigeons and several crates of Champagne attempting to pass over the North Pole and land near the Bering Strait. This estate vineyard wine is a blend of Cabernet Sauvignon, Cabernet Franc, Petit Verdot and Malbec for a classic Bordeaux style wine. It carries the Monterey County AVA and there were 125 cases produced, and the aging potential is for eight to ten years, and that sounds about right to me. 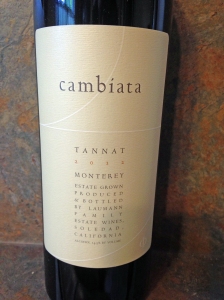 The last bottle of the shipment was Cambiata Tannat 2012 with a Monterey AVA. It is estate grown, produced and bottled by Laumann Family Estate Wines of Soledad, California. Eric Laumann intention was to make wines beyond the classic Bordeaux, Burgundy and Rhone wines of France that do so well in Monterey, and some of the varietals that he grows are Albarino, Tannat and Dornfelder. The Tannat grape actually means tannin, and the wines are known to be very dark and tannic, because of the thick skins and many seeds per grape, and the varietal is famed from the Madiran region of France, but it is becoming popular in South America and in the United States, it is being grown in Texas and Virginia, as it thrives in hot climates. The grape is also known as Maidiran, Harriague, Moustrou and Bordeleza Beltza. The wine was aged for twenty-eight months in sixty gallon barrels, all French and forty percent new. All the fruit came from the Rocosa Loma Vineyard and 348 cases were produced, with a suggested aging potential of eight to ten years. As an aside, in music, the Nota Cambiata is a leaping note that enlivens a melody.

I have to admit that I am like the proverbial kid in the candy store, and I really look forward to trying all of these wines, but some two of them, may be quite down the road, and I have the time.