Posted on February 3, 2016 by thewineraconteur

How can one not enjoy Social Media? I saw a post from the Gene & Georgetti restaurant announcing that Elizabeth Doyle was performing at their new location and it made me smile. First off, one has to realize that Chicago was always the big city to visit growing up in Detroit, and in the old days I had the pleasure to go there often because of work. Gene & Georgetti was one of the restaurants that I had always wanted to go to, but it was always booked up, because of the trade show that I was always attending. One of my major vendors always hosted a grand party on the second floor of the restaurant, and I did not want to attend the party, but I did want to dine there; so I asked one of the representatives of that firm to just get me a table reservation and I would pay for my own dinner, that way there would be no “strings attached.” Elizabeth Doyle on the other hand was an entertainer that my Bride and I saw at the legendary Pump Room in Chicago, which is now a memory of an era gone by.

We had dinner at the Pump Room, which was located in the Ambassador East Hotel, and we felt like royalty. Everywhere one would look there were photographs of the greats in entertainment, politics and people that made the headlines for assorted reasons. The food and the service were impeccable and old world in style. Not only did we have a tremendous meal there, we danced the night away on the small dance floor that was adjacent to where Elizabeth Doyle was playing the piano and singing. She sang not only the great standards, but also songs that were important to her. When I went to the cabinet in the family room to search for the CD, my Bride asked me what I was looking for, I mentioned the posting that had caught my eye, showed her the CD and asked her if she remembered the entertainer. She did indeed. 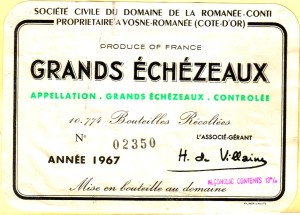 We not only had great memories of fine dinners, but some great wine as well. The night that we were at Gene & Georgetti, not only did we have a table, we had the premier table in the restaurant, and it was so amazing to see so many vendors and sales representatives that had to walk by our table and they all wanted to make small talk to us as well, we felt like celebrities that evening. Even though I insisted that we would pay for our dinner, the gentleman that got us the reservation did send us a bottle of wine, which I did accept. That night we had the pleasure of enjoying Altesino Brunello di Montalcino 1996, which was perfect, because Gene & Georgetti is an Italian Steak House and the wine was perfect. Brunello di Montalcino is from the Tuscan region and shares the spotlight with two other great wine districts of the area that make great use of the Sangiovese grape. Sangiovese is also used in Vino Nobile di Montepulciano and Chianti, and is also found in the “Super Tuscan” wines that are listed as Toscana IGT. Then how does one forget having a great Pinot wine at the Pump Room. The odds are that I may never have the pleasure of enjoying a bottle of Domaine de la Romanee-Conti Grands Echezeaux again. This Grands Cru from the village of Flagey-Echezeaux is legendary, and the funny thing is that Grands Echezeaux is actually less then a third of the size of Premieres Cru Echezeaux, and the Domaine de la Romanee-Conti is the largest owner of a single plot there. All of these great wine memories from a simple Social Media posting, not to mention the reason to play the CD again, and relive some great times.

A non-technical wine writer, who enjoys the moment with the wine, as much as the wine. Twitter.com/WineRaconteur Instagram/thewineraconteur Facebook/ The Wine Raconteur
View all posts by thewineraconteur →
This entry was posted in Dining, Wine and tagged Altesino, Brunello di Montalcino, Burgundy, Domaine de la Romanee-Conti, France, Grands Eschezeaux, Italy, Pinot Noir, Sangiovese, Tuscany. Bookmark the permalink.

2 Responses to A Chicago Memory