Posted on December 5, 2015 by thewineraconteur

December Sixth is Cabernet Franc Day according to the Wine Lover’s Calendar. May I also say that it could be a genuine holiday here in my home, before I even knew about the Cabernet Franc grape; I enjoyed the product, without being aware of it. Let me preface that by stating that in the Dark Ages, when I was learning about wines, the grape varietals were secondary to the region. One did not look for a Cabernet Sauvignon back then; one looked for a Bordeaux or Medoc. Back in the day France and the red wines were the stars and as I was learning, my preference and my wallet tended towards Saint Emilion and Pomerol and the reds from the Loire Valley, like Chinon and Saumur. As I learn more and more about wines, I have discovered that Chateau Cheval Blanc is about two-thirds Cabernet Franc and that Chateau Ausone is almost half Cabernet Franc and half Merlot. I am not saying that those were the only wines that I drank as a youth, but I did have the fortune to try both of them, and unfortunately now they are too dear for any further indulgences.

It is one of the more important grapes for the wineries, and it has been deduced to be one of the parents of the Merlot grape. For the wineries, it is an “insurance” grape, because it is not only mellow, but ripens earlier then some of the other grapes, so it can be harvested before some of the other crops. As I stated earlier, it shines in France, but it can also be found in Italy, New Zealand, Australia and South Africa. It is also grown in both South America and North America. In California it is a mainstay, because it is one of the grapes usually found in the Meritage wines, which pay homage to the Clarets of France. I also know first hand that it grows in the Midwest, as I have had local wines of Ohio and Michigan featuring Cabernet Franc. I have also enjoyed it in Ontario, Canada both as a red wine and as an Ice Wine, in the Niagara Falls area, it is very versatile.

So why do I say that it could be a holiday in my house hold? Since I have introduced Cabernet Franc to my Bride, it has become almost a mantra to her. She may know Cabernet Sauvignon, Pinot Noir and Chardonnay, but she gets entranced when she hears Cabernet Franc. As the Exchequer of the Funds here, there have been times, when she will even splurge a bit more when it is for Cabernet Franc, but of course I would never take advantage of that “insider trading” knowledge for my own good. 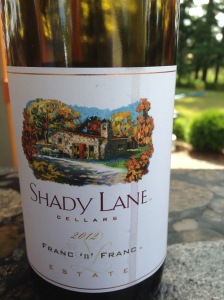 A non-technical wine writer, who enjoys the moment with the wine, as much as the wine. Twitter.com/WineRaconteur Instagram/thewineraconteur Facebook/ The Wine Raconteur
View all posts by thewineraconteur →
This entry was posted in Wine and tagged Cabernet Franc. Bookmark the permalink.