Posted on November 15, 2015 by thewineraconteur

If you are any where near my era and enjoy classic comedy, the above lines penned by Bert Kalmer and Harry Ruby from “Animal Crackers” will instantly bring one to smile, after all, it was also the theme song “for the one, the only, Groucho” as introduced by George Fenniman. The other day as I was reading the morning paper, which I enjoy, as compared to reading an e-edition, I spotted an article about a one man play that was coming to the Detroit area. I quickly mentioned it to my Bride, as she is the Social Secretary of the household and keeps track of our comings and goings, to which I tend to just dutifully follow. It turned out that we had some free time, so we booked two tickets to see “An Evening with Groucho.” We have enjoyed many one man plays that I have wrote about, over the years; Barrymore, Edgar Allen Poe, Tallulah and Mark Twain all portrayed by famous actors. This play was being performed by Frank Ferrante, who I have to admit, I had never heard of; it turns out that Frank Ferrante has performed as Groucho over 2500 times in various productions from the time that he was chosen to play Groucho in the off-Broadway production of “Groucho: A Life in Review” written by Arthur Marx, the son of Groucho. 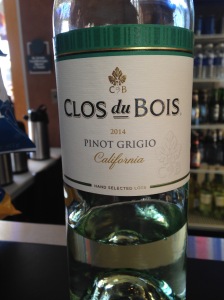 I am an avid Marx Brothers fan, and have seen all the movies, as well as having grown up watching Groucho on his television show, when I was still a child. The idea of traveling an hour away from our home to see this production, did not deter me in the least, and of course my Bride was game as well; and sometimes I am sure that she humors me for all the different tangents that I take in this life. It was all I could do, not to sing along with some of the songs that I know by heart, and not mention the ability to recite some of the classic lines from the films that I know so well. I mean all I needed was my pith helmet and my “swallow-tail” cutaway coat and I would have been in Seventh Heaven. 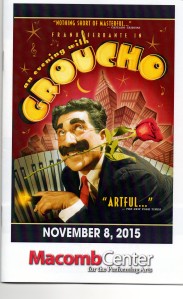 The show was almost a complete sell-out, so we had to go to the box office early to pick up out tickets, as there was not time for the tickets to be mailed. Since we arrived very early on the campus where the production was being performed, we wandered around and found a small food and beverage area, and since we planned on having dinner after the show, we decided to get a quick snack. We had an order of hummus and crackers to stave off any bit of hunger for awhile. Thankfully for both of us, and a reason to write about this trip, there was a choice of three different wines. We settled on the best to pair with the hummus and crackers, as well as the plastic glasses that the wine was served in. We enjoyed a couple of glasses of Clos du Bois Pinot Grigio 2014 from California. Pinot Grigio is just a light uncomplicated white wine for the most part, and since it just had a California designation, it meant that the fruit could have been harvested from anywhere in the state. It was just the perfect wine to just relax with, and let the show be the star of the moment.

“I’ll stay a week or two,
I’ll stay the summer thru,
But I am telling you,
I must be going.”

A non-technical wine writer, who enjoys the moment with the wine, as much as the wine. Twitter.com/WineRaconteur Instagram/thewineraconteur Facebook/ The Wine Raconteur
View all posts by thewineraconteur →
This entry was posted in Wine and tagged California, Clos du Bois, Pinot Grigio. Bookmark the permalink.

4 Responses to Hooray for Captain Spaulding