“The Caller” is in Saginaw

Posted on March 28, 2015 by thewineraconteur

One of my frequent casts of characters that I get a chance to mention is “The Caller.” This nom de plume was bestowed upon him by Oliver of The Winegetter fame. “The Caller” is a good friend of my Bride and now me as well. He and his wife get to travel often, either for his business or hers and in between if we are lucky we can coordinate a dinner date with them. The two of them have always enjoyed a good meal and they are devotees of what is now called “craft” cocktails as well as some wine. I will take a small bit of credit for moving his interest up a notch or two about wine. The reason that he is now known as “The Caller” is because he will out of the blue, text me, to let me know that he is out and about, and enjoying some wine with his dinner; or he may request my assistance in selecting a wine from the carte in a restaurant. As I was gathering some notes to make a new article, lo and behold, I received a text message from “The Caller” and he is in Saginaw, Michigan. As always his message may be a bit cryptic, but he let me know that he was having dinner with friends. Knowing him as I do, I am sure that he was enjoying a steak, as the two of them seem to have a predilection towards steaks, from filets to porterhouse cuts. He is also known to enjoy some game dinners and Italian Cuisine as well; I guess that is why he and I hit it off so well, as we are both of the same ilks when it comes to dining.

The first bottle of wine that he sent me a photograph of by text was Belle Glos Pinot Noir 2013 from the Clark & Telephone Vineyard of Santa Maria Valley in Santa Barbara County, California. He has had that wine before and so have I, and I have written about it before, but it bears repeating only for “The Caller” and his efforts. This is a wine made by Joe Wagner, the youngest son of Chuck Wagner of Caymus Wines. He is carving out a name for himself and soon may not be in the shadow of his father. This is a fine wine and Belle Gloss harvests fruit from a couple of different vineyards. The Clark & Telephone Vineyard is located near the intersection of Clark Avenue and Telephone Road, so it is easy to understand the origin of this vineyard. 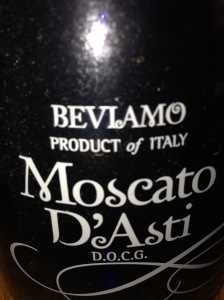 For after dinner “The Caller” texted me another photograph and they were enjoying Bevlamo Moscato D’Asti DOCG NV. This is one of the sweet wines from the Piedmont in Italy and most Asti wines are known for their fruit and low alcohol, and what the Italians refer to as Vino frizzante. The Moscato grapes after harvesting are crushed and chilled almost to freezing in stainless steel vats. The wine is fermented and bottled to capture the carbon dioxide, which naturally creates this slightly effervescent finished wine. He did let me know that he did not enjoy this wine as much as the Pinot Noir.