While we were at a conference at Mission Point Resort on Mackinac Island there was a dinner for all of the attendees and it was in a private dining room located between two of the restaurants in the main lodge. The location was stellar as it looked out on the Straits and one could watch commercial freighters and pleasure boats as well. It was only a couple of days after the annual Port Huron to Mackinac race. The cocktail reception began out on a deck outside of the dining room and it was very charming and the feeling of the resort was upon us all. Some of the attendees had just returned from a golf outing, and others like ourselves went and enjoyed some wine in the afternoon prior to the dinner.

The dinner was a well prepared example of what the resort could offer. We started with a Michigan Salad. Then we all had a plate of filet of beef and a chicken breast with potatoes and Porcini mushrooms. For dessert we enjoyed a fruit topped cheesecake and coffee. 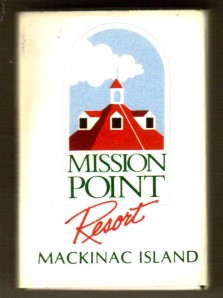 The bar that started out on the deck was later rolled in to the dining room and it was well stocked with beer, liquor and of course wine. The wines were a collection of popular wines all from California with just a California designation which for a large group was just fine. There was a Sutter Home Sauvignon Blanc NV and all the rest of the wines were from Canyon Road Winery. From Canyon Road there was a Cabernet Sauvignon, Merlot, Pinot Noir, Pinot Grigio and Chardonnay and all were vintage 2013. While not as interesting as some of the other wines that we enjoyed during the conference they worked well for the evening event. I started with Chardonnay and then went to the Cabernet Sauvignon during my entrée and then went back to the Chardonnay. All in all it was a fine conference and the planners did a fine job and no one was unhappy.

A non-technical wine writer, who enjoys the moment with the wine, as much as the wine. Twitter.com/WineRaconteur Instagram/thewineraconteur Facebook/ The Wine Raconteur
View all posts by thewineraconteur →
This entry was posted in Dining, Wine and tagged Cabernet Sauvignon, California, Canyon Road Winery, Chardonnay, Merlot, Pinot Grigio, Pinot Noir, Sauvignon Blanc, Sutter Home. Bookmark the permalink.

4 Responses to Dinner Overlooking the Straits

Leave a Reply to the drunken cyclist Cancel reply