I come from Southwest Detroit, so I did have a chance to enjoy some Mexican dinners in my life, though back in my day, the area for the Mexican restaurants was a more finite area. Now in my old neighborhood it is everywhere, and in fact the same could be said for most of the suburbs around Detroit as well. From my earliest days when I learned to enjoy Mexican restaurants and cuisine, I had discovered Mole Sauce (to this day I still cannot get an accent mark above letters). Mole Sauce tends to be a rich sauce that is made with Mexican Chocolate, and the flavor tends to be spicy rather then sweet, when one hears of the major ingredient. Years ago I enjoyed Mole Sauce with ribs, though now it seems that it is paired with chicken, which is fine. In fact I tend to question the “authenticity” of a Mexican restaurant if there is not Mole Sauce on the menu, as I tend to presume that it is a Mexican restaurant geared for Americans and just cover everything with cheese.

We discovered a wonderful restaurant by accident in a strip center in one of the suburbs around Detroit, by word of mouth. We have gone there often since our first introduction and we have never been disappointed even when it is packed with diners, the food and the service have still been great. Las Palapas has always pleased us, even the fresh Nacho chips are a hit. Add the sauce and some Guacamole dip and I could almost make a dinner from the appetizers. When I get the Chicken and Mole Sauce, I am a happy camper. While my Bride sometimes orders the same dish, she also tends to enjoy the Steak Fajitas though they end up giving her enough for two dinners. I know that they have dessert there, but we never seem to have any room left to try any of the choices. 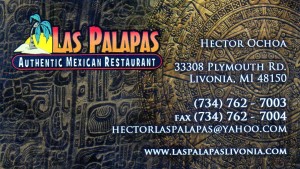 I tried to order wine with the dinner, but the wine list is a bit of an afterthought and probably so, as most people think of having beer with Mexican food. They had Stone Cellars California Chardonnay NV as one of the wine choices, and on the menu they are just listed by varietal. On the right day, this may be just as enjoyable as a beer with the dinner, as it is a crisp non-fussy Chardonnay. Try as a might when I go there I still end up succumbing to the house Margarita, which is offered both on the rocks or frozen. They pride themselves on making a huge batch of this drink every morning and allow it to mellow during the day and while it is the house drink, I have never had a better Margarita before or since I first have tried theirs. Tequila is one of the major liquors at Las Palapas, and I noticed on the drink card the long list of different tequilas they offer by the shot and one of them is $90.00 a drink, no I haven’t tried it, as I can get carried away enough with wine. So I guess that I shall continue to forgo wine on the occasions when we stop at this restaurant and go native.

A non-technical wine writer, who enjoys the moment with the wine, as much as the wine. Twitter.com/WineRaconteur Instagram/thewineraconteur Facebook/ The Wine Raconteur
View all posts by thewineraconteur →
This entry was posted in Dining, Wine and tagged California, Chardonnay, Stone Cellars. Bookmark the permalink.

3 Responses to A Mexican Restaurant