If you are of my generation that grew up watching black and white “B” movies on television when there was only six channels, then you remember hearing the above statement when there was a hypnotic experiment occurring whether for nefarious means or not. We went to see Kevin Lepine “Hypnosis Unleashed” at a theater in Royal Oak, Michigan. Kevin is a friend of the family and since he lives in Las Vegas, he even attended our son’s nuptials that I recently wrote about. Kevin was selected as “The Best of Las Vegas 2013” and is a nightly headliner at the Hooters Casino Hotel. The show was ribald, risqué, off colored and totally Politically Incorrect, so he had the audience roaring in their seats during the entire show. “I want my volunteers to have the time of their lives. Volunteers have more fun than the audiences. You will do insane things, but you will never be humiliated” are the statements that are repeated often by Kevin as he is looking for members of the audience to join him on the stage. While it is all true, it is said with a certain tongue-in-the-cheek attitude and a devilish sparkle in his eye. Suffice it to say that none from our table were volunteers and I might add that none of Kevin’s family who came for the show was either.

We met our son and his new wife at The Royal Oak Brewery as they were treating us to a night out, as his Mother’s Day (and possibly Father’s Day) present. The restaurant was just around the corner from where Kevin was performing so it was a good location. My Bride and I got there very early, so we got a table and waited for them to join us, and since she was hungry we got an appetizer plate to share of Nacho Chips, Salsa and Guacamole. The restaurant since it is beer oriented, offered food that was more beer-centric and friendly, which to me meant salty, so that people should order an extra beer or two. When the newlyweds arrived we ordered our dinners, and since my Bride and I were sated, we shared an order of Jambalaya, which was very tasty, though I found the idea that there were only two pieces of shrimp in the order, a tad disconcerting especially when I think of the Jambalaya dishes that we have enjoyed down in Louisiana. The food was good and it is one of the favorite dining establishments in Royal Oak for the newlyweds, so it worked out well for the evening. In fact the last time we saw Kevin perform, my Bride and I ate elsewhere and met them at the theater, and they had dined at The Royal Oak Brewery that time as well.

With the name of The Royal Oak Brewery, one can imagine what the beverage of choice is, and I will say that it was not wine. The wine card had a total of nine choices of wine all priced at $6.50 a glass or $24.00 a bottle. They offered four white wines, a Chardonnay, a Pinot Grigio, a Riesling and a Moscato. The five red wines that were offered were a Cabernet Sauvignon, a Merlot, a Malbec, a Pinot Noir and Ménage a Trois (a blend of Zinfandel, Cabernet Sauvignon and Merlot). My Bride ordered a glass of the Lindeman’s Bin 65 Chardonnay 2013 from South Eastern Australia. This is more of a bulk wine, and it was fine in the setting and she was happy enough with it. I ordered a glass of Dona Paula Los Cardos Malbec 2012 from Mendoza, Argentina. The wine at first was on the bitter side, but mellowed a bit in the glass, but not what I would call a fine example of a Malbec wine. When the Jambalaya arrived I switched over to a Canyon Road Pinot Grigio from California in anticipation of some heat in my dish. The heat was not there, but the Pinot Grigio was the best of the three wines that we had during dinner. During the show we enjoyed cocktails and towards the end of the evening I was getting sleepy…sleepy (not really). 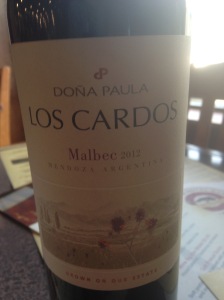 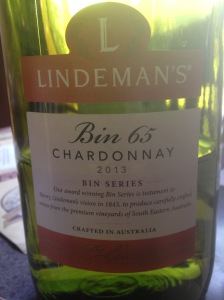