I remember that we were driving and it seemed forever to get to a wedding site out near Holly, Michigan. It was a very pastoral area, and I thought for sure that we had made a wrong turn and we were lost, that is what happens when you get a city boy out of the city. We were part of a small group attending to celebrate a couple who each were each getting married for a second time. The ceremony and reception was being held at The Secret Garden, and I remember thinking how appropriate for the destination, as I was sure that it was a secret. We finally got there and parked our car and proceeded up a walkway and there in the middle of nowhere was this delightful 16’th Century Tuscan structure, it was gorgeous, with a patina of age that made it appear that it had been transported centuries ago and forgotten about until that day. The structure was a large semi covered garden where the ceremony was to be held in the garden and all of the guests were seated at tables surrounding the perimeter of the garden under roofs to protect the diners. 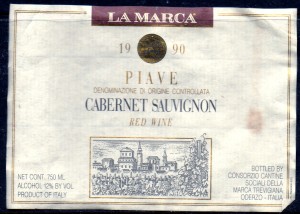 I was intrigued by the structure and how it looked so perfect in the setting, but I knew that it was like being on a cinema location where they could not find the proper structure, so they built it. It was perfect in all aspects of taking all of the guests to a more romantic and genteel era and it was beautiful. Everywhere you looked, the walls with frescos, the pillars, the plaster, the statuary and gates; all had been finished to have a patina of being there for centuries. In talking to some of the staff, I discovered that this was the first of seventeen planned structures each with its own unique personality. There was to be a Japanese Garden, a Hidden Garden, a Moss Garden, and English Garden among others, as well as a Labyrinth and a Maze all located on some 78 acres.

The tables were set up for eight dinners in like little porches and everyone was seated in such a way that the center garden was the focal point for everyone, and the wait staff brought out the food and drinks almost unseen. The ceremony and later dancing was in the courtyard of the garden, while the guests could stay under the protection of the roofline from the sun, and thankfully there was no inclimate weather. The dinner was started off with a classic interpretation of a Caesar Salad. The entrée was a Surf and Turf variation of Filet Medallions and Grilled Salmon. 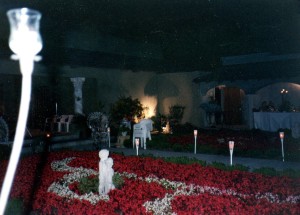 There was a well stocked bar, but I was going to enjoy some of the wine of the evening. Whether the wine was selected to add to the ambiance of the Tuscan structure or just by happenstance the white and the red wine were both from Italy. The white wine was a Bolla Soave Classico 1993 and comes from a village just East of Verona. The Classico designation means that the fruit was harvested from hillside vineyards around Soave and Monteforte d’Alpone, the two villages that have the designation for this wine. It is a crisp wine that reminds one of a Chardonnay, but a bit more bitter or dryer then would be expected. The rules are that 70% of this wine has to be of the Garganega varietal, and that it may be blended with 30% of other grapes, but only 15% of it can be from Trebbiano di Soave, also known as Verdicchio or Nestrano, and there may also be Pinot Chardonnay. They also protect the local grapes and allow up to 5% of the blend to have Friulano, Cortese, Riesling Italiano, Vespaiolo and Serfrina. All the wines from Soave are white. The red wine for the evening was La Marca Piave Cabernet Sauvignon 1990 and this comes from the province of Venezie, near the Piave River. This area of Italy is rather unique in that it is mostly planted with French grape varietals that were brought over in the late 19’Th Century. Merlot is the leading varietal for this area and accounts for about 60% of the production.