We try not to go out on holidays, as there are usually too many people, and I feel that the service and the food service can suffer from the crowds that think they have to go out.  We enjoyed a very quiet Father’s Day at home, and I heard from all three children, so life is good, not to mention some of my grandchildren as well.

My Bride has been very hectic, as she is always in the month of June, because that is a peak month for her business.  She decided that she wanted to take a respite from all of the demands, and make a stew.  She finds stew to be a great comfort food and I think it helps her relax when she makes the dish.  As for me, I try to stay away from the kitchen and not try to add my two cents to the preparations. 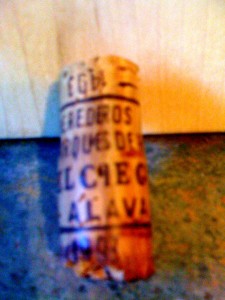 I went down to the cellar to grab a bottle of wine for dinner, that is the true value of having a cellar, there is never an urgency to buy a bottle of wine, but it can also be a bane.  I was going to get a Cabernet Sauvignon based wine, either a Medoc or a Meritage and I wandered over to the area where I keep some of the assorted “foreign” wines i.e. not French, American or Italian wines and I started looking at some of the Spanish wines.  As I have written before, I am smitten with the wines of Rioja.  The varietals used in Rioja wines on average are 60% Tempranillo, 20% Garnacha Tinta and the rest is Mazuelo and Graciano.  I prefer the “Reserva” designation over the basic Rioja.  Well, while I was looking at the wines, I discovered a Marques de Riscal Rioja Reserva 1993.  The first time that I had this wine was the 1970 vintage and I have bought it happily whenever I found it, and so has my Bride.  As I pondered whether or not the wine was too old, I recalled an article that I had read in the near past of this winery opening a hundred year old bottle and the wine received rave reviews.  So I grabbed this twenty year old Rioja Riserva to see how it had fared.  I mean I was not in a restaurant where there might have been a problem if I refused a bottle because it was over the hill, because at my home, I could just grab another bottle of wine without too much of a consequence.

I removed the brass “chicken wire” mesh wrapping around the bottle, and removed the metal foil cover.  I grabbed my favorite corkscrew because the screw always seems to grab the cork, with out causing the cork to crumble.  I slowly pulled the cork out and there was a slight bit of crumbling, but on the whole the cork was fully intact.  I played with the cork between my fingers to check the firmness and then I smelled the cork for any bad odors, so far, so good.  I poured the wine into my wine glass and I was amazed at the deep color of the wine, as I had anticipated a lighter shade or maybe even into the browns, and it was still the color that I always look for.  The first taste was a bit of a surprise as I tasted a bit more alcohol than I normally do.  I let the glass sit a while and I went back to it, and it had mellowed out, though the fruit was there, it was not as plentiful on the tongue as I normally taste.  My Bride was happy with the wine and I also found it more appealing as the evening wore on.  Though the wine is still younger than any of my children, it was a good choice.

A non-technical wine writer, who enjoys the moment with the wine, as much as the wine. Twitter.com/WineRaconteur Instagram/thewineraconteur Facebook/ The Wine Raconteur
View all posts by thewineraconteur →
This entry was posted in Dining, Wine and tagged Garnacha Tinta, Graciano, Marques de Riscal, Mazuelo, Rioja Reserva, Spain, Tempranillo. Bookmark the permalink.

1 Response to A Quiet Father’s Day