We just received the latest shipment from a wine club that we joined years ago, on one of our trips to Monterey.  They have a couple of different options and we chose the “elite” package of reserve wine selections in anticipation of getting some wines, that we may not ever have a chance of encountering here in Michigan.  I always look forward to the selections that they send and I enjoy the little pamphlet that accompanies the shipment, as it gives some background information on the wines, as well as a recipe or two, which we may try. 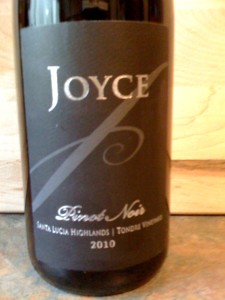 The first wine Joyce Pinot Noir Tondre Vineyard Santa Lucia Highlands 2010 sounds enticing.  The Tondre Vineyard has been touted as an excellent area for growing in the appellation of Santa Lucia Highlands in Monterey County.  Pinot Noir has been a varietal that seems to do very well in Monterey County and we have enjoyed every bottle that we have encountered.  This wine is being touted as being light, as it has been barreled for ten months, racked twice during that time and then bottled unfiltered.  The aging potential for this wine is estimated at six to eight years. 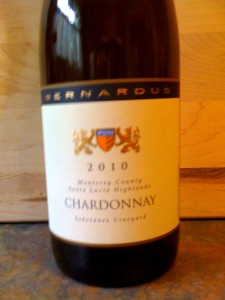 The next wine we received is an old friend, as we were at the winery and enjoyed dining at their stellar restaurant Marinus, while touring Bernardus Winery.   Though we have enjoyed the wines from Bernardus, this is a new offering from the Soberanes Vineyard in the appellation of Santa Lucia Highlands, as opposed to the classic Bernardus in the Carmel Valley.  This wine Bernardus Chardonnay Soberanes Vineyard Santa Lucia Highland 2010 has been fermented and aged in the classic Burgundy style of winemaking and this is the first vintage from this vineyard.  The aging potential for this wine is estimated at five to seven years. 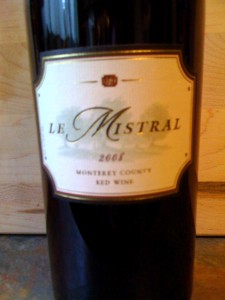 The last wine in the package is from Le Mistral Vineyard and is simply called a red wine.  We have had this wine from other years and I do believe they are being modest.  Le Mistral Red Wine Monterey County 2008 is a blend of the following varietals; Syrah, Grenache, Alicante Bouschet and Petite Sirah.  This is also a wine that has some further pedigree that it is the sister vineyard to Ventana Vineyards of Monterey County.  The other part of the pedigree is that it was founded and planted by Joseph Phelps of Napa Valley, another winery that my Bride and I had visited as well as tasting and enjoying some of their famed Insignia wine, not to mention purchasing.  The aging potential of this “red wine” is six to ten years.

2 Responses to Taste of Monterey