I am happy to say, that through my writings I have met in cyber space some other Bloggers that write about wine.  One of these writers, Oliver who writes The Winegetter, which is a play on words of the pronunciation of his last name;  I have actually had the good fortune to meet and his charming wife as well.  Well we met a second time, and this time he wanted to venture out my way.  So I gave him a couple of restaurants that he could check out on the web, to see if they sounded interesting.  I warned him that most of the restaurants did not have much of a selection in German Riesling wines, and he in formed me, that, that is the norm.  He decided upon, a restaurant that I have not been to, and it is kind of between our two cities. 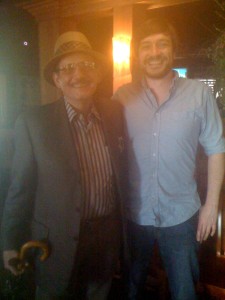 We decided on a restaurant called Karl’s Cabin, and the restaurant is a large log cabin structure out in the middle of no where.  Actually it is surrounded by lots of fine subdivisions, but there is not much else at the intersection other than the restaurant.  When we arrived the parking lot was packed on a Wednesday afternoon, but I noticed that there was a side room with a large banquet or party going on, besides all of the diners in the restaurant, which was also very busy.  I arrived a little early and got us a booth, so that I could watch for Oliver’s appearance.  When he sat down, there was so much information for us to relay to each other, that it took a little while to look at the menu.  Oliver decided on a Smoked Fish Pate for starters, and there was Smoked Whitefish and Smoked Salmon on the dish.  He then ordered some comfort food, as it is now called in restaurant vernacular, he ordered Meatloaf with mashed potatoes and gravy.  When it was time for me to order I tried the Bacon Wrapped Scallops and then I ordered a dish of Jambalaya, which was tasty, but not as spicy as what I have had in New Orleans.  We sampled each other’s offerings, to make sure that we did not miss anything, and all the time there was so much to talk about, as if we had been friends for years and years.

The wine list was not that large and there were several of the wines that the public expects to see on a wine list.  I guess that is good, because it does keep more people drinking wine.  Oliver had looked at the wine list on-line earlier, and he was intrigued by a Pinot Noir from Oregon, and he had never had one.  He was concerned that it might not pair that well with my dish, and I told him, not to worry, as I am not that rigid about the rules of pairing wine with food as some people are.  We ordered a bottle of Wallace Brook Cellars Pinot Noir 2011 from the Willamette Valley in Oregon.  We both smiled when the waitress unscrewed the cap, and so did she, because with screw caps, there is less work and less fanfare.  I mean who is going to smell a metal cap?  The wine was a lighter shade than most of the Pinot Noir wines that I have tried, though much darker than a Pinot Noir Rose, the color was a shade of red.  The nose was light, and it was a very easy drinking wine.  The wine did not overpower any of the dishes and it was agreeable enough even with our appetizers.  By the time the waitress brought us our check, I discovered that lunch had almost spanned three hours, and it was a most pleasant three hours of the day.  As we were leaving, I suggested that Oliver try a back road from the restaurant to get back home.  I thought that it would be a more picturesque route than just being on the highway, and from our later email correspondence, I guess that it did not take him that much longer to get home.  I am happy that we have met, and it was a wonderful way to spend an afternoon with a new “old” friend, food and wine. 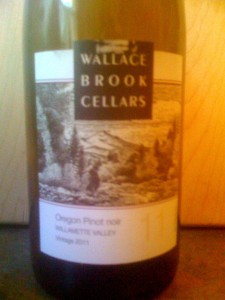 A non-technical wine writer, who enjoys the moment with the wine, as much as the wine. Twitter.com/WineRaconteur Instagram/thewineraconteur Facebook/ The Wine Raconteur
View all posts by thewineraconteur →
This entry was posted in Dining, Wine and tagged Oregon, Pinot Noir, Wallace Brook Cellars, Willamette Valley. Bookmark the permalink.