Posted on February 22, 2013 by thewineraconteur

This past week a restaurant that I have mentioned before Bacco Ristorante in Southfield, Michigan received The Detroit Free Press 2013 Restaurant of the Year.  Add to this that they had received a couple years earlier Hour Magazine’s award and you know that they are doing something right.  Luciano Del Signore is the Owner/Chef of Bacco Ristorante and my Bride and I have followed his culinary skills for over twenty years.  I applaud any one that can keep delivering quality food in the economic cycle that Michigan has been in.

The food has always been excellent and so has the service.  We have never encountered a bad day, which does say something for the care and attention that goes on at the restaurant.  They also will not say no to a request, which I find wonderful, though I would certainly not attempt to tell his staff how to cook.  As an example that I will share; my Bride and I both enjoy the Beef Carpaccio that we have dined on for years, well, then one day when we were there, we noticed that the classic interpretation of this dish was changed.  It became more creative, I asked our server, if I could still get the classic preparation and was told, that it would not be a problem, and we have been doing it that way ever since. 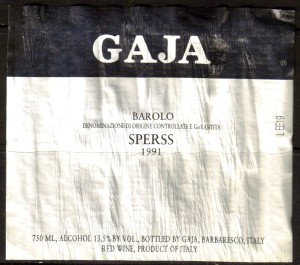 Another great aspect of Bacco Ristorante is the magnificent wine list, and Luciano does enjoy his wines.  The restaurant’s name is actually a play off of the name of the Roman God of wine Bacchus.  The cellar at the restaurant has about 11,000 bottles of wine. Talk about cellar envy.  One time when we were dining there, as I was studying the wine list, I saw a wine that intrigued me; it was Gaja Ca’Marcanda Promis 2000 from Toscana.  It was a very in a very popular price point, and if you know the Gaja name, one does not equate Gaja and popular price together.  Just after seeing this wine, I saw Luciano walking around the room with his chef’s coat on, he was greeting and chatting with the customers, especially his repeat customers.  Well he came over to our table, gave my Bride a kiss, shook my hand, as well as the hands of the other couple that we were with.  He saw that I had the wine list in my hand, and he asked me what I was going to order.  I joked with him that I saw this Gaja wine on the list, and asked if it was an illegitimate relation of Gaja, and Luciano laughed.  He said “I knew you would spot that wine.”  I asked him, his opinion of the wine, and he said “order it, if you don’t like it, you don’t have to pay for it.”  How can one say no to an offer like this, in fact the wine was so great we ordered a second bottle for the table, before any of the entrée dishes had been brought out.  Later on I found out that Gaja Ca’Marcanda Promis 2000 is a blend of Merlot, Syrah and Sangiovese varietals. 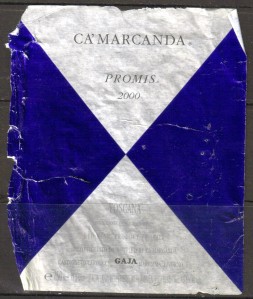 After dinner, when Luciano was making another tour of the restaurant, he stopped by and asked how the dinner was, and if we had enjoyed the meal and the wine.  I told him that we had a great time, and he saw a second bottle of the wine on the table.  I asked him casually if I could buy some of the wine, as I had not seen the wine at any of the wine purveyors that I frequent.  He laughed again, and asked if a six-pack would do.  I said yes, if he could afford to take that many from his cellar at the moment.  He smiled and said that the six-pack was already in my trunk.  Then we both started laughing.

These are memories that are enjoyable: and gives me reasons to go to the restaurant time and time again.  Perhaps I missed my calling and should have been a food critic, but I don’t think so, I want to go and enjoy myself, and then food and wine would become work.

A non-technical wine writer, who enjoys the moment with the wine, as much as the wine. Twitter.com/WineRaconteur Instagram/thewineraconteur Facebook/ The Wine Raconteur
View all posts by thewineraconteur →
This entry was posted in Dining, Wine and tagged Ca'Marcanda, Gaja, Italy, Merlot, Promis, Sangiovese, Syrah, Tuscany. Bookmark the permalink.

2 Responses to Congratulations to Bacco Ristorante