Posted on February 19, 2013 by thewineraconteur

One day while we were enjoying the charms of Charleston, we became real tourists and took a trip to Boone Hall Plantation, which is one of the few working plantations in the South.  While it is not Tara or Twelve Oaks which were grand fictional plantations, it is a wonderful day trip to see.  While you are driving up to the plantation you encounter the Avenue of Oaks, which were originally planted by Captain Thomas Boone.  All of the people that you encounter during your guided tour of the plantation are dressed in the attire of the day.  There is an area where you can see how bales of cotton were set adrift and allowed the current to carry the cotton to Charleston, and from there they were sent to spinning mills in the North and to England.  It is also stressed that Boone Hall Plantation was one of the most humane plantations of its day.  The grounds were used for theatrical and television films through the years.  It was a wonderful way to spend a day in the old South. 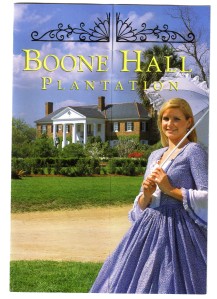 After returning to downtown Charleston, we enjoyed our wine tasting at the Inn, and then we changed for dinner.  We were going to a restaurant near the Inn called Magnolias.  I thought that it was the perfect name for a restaurant in the Old South, and Charleston by extension.  As we were seated at our table, our waitress was very gracious and informative about Charleston as well as about Magnolias.  We were telling her how much we enjoyed our dinner the night before at Cypress, and her eyes lit up.  She then informed us that both restaurants plus one other establishment were owned by the same gentleman.  She really made us feel at home. 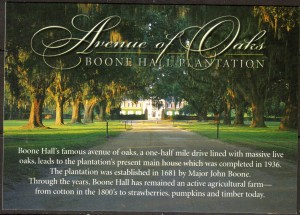 Magnolias was more casual of a venue, but they still offered a great meal.  We started off by sharing a shrimp and sausage appetizer with Tasso gravy over grits; I finally succumbed to trying them.  Then we enjoyed some blue crab bisque, we had still not had some of the legendary She Crab Soup that Charleston is noted for.  My Bride had a local fish dinner of Carolina Carpet Bagger filet with fried oysters, green beans with Madeira and Béarnaise sauces, while I enjoyed a sautéed Grouper with crab and artichoke topping, fresh spinach, a potato cake and lemon Beurre blanc. 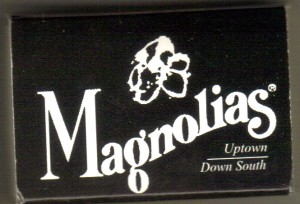 As we were looking at the wine list for our meal, my trusty Bride zeroed in on another of our favorite wineries that we had visited in Napa Valley, namely St. Supery.  As this was a winery that we seldom encountered at that point, we ordered a St. Supery Sauvignon Blanc 2000 to go with our meal.  This wine paired very well with the courses, and was so refreshing from the humid weather we were encountering.

We had also ordered soufflé for dessert, when we had placed our other menu requests, because of the additional time to prepare a soufflé.  As we were having some coffee in anticipation of our dessert, our waitress brought over a gentleman to introduce us to.  He was the owner of the two restaurants that we had so far eaten at while in Charleston.  He sat down with us and started telling us his history and that he was originally from Michigan.  Well we had met another raconteur and we ordered a bottle of champagne to go with dessert and poured some for our new guest as well.  We had a bottle of Piper Sonoma Blanc de Noir champagne which added to the enjoyment as we were regaled by this gentleman and his tales of Michigan and of Charleston.  We also discussed other restaurants and wines that we had all enjoyed over the years, and I was surprised at the length of time, he sat at our table keeping us company.  What a wonderful evening my Bride and I had.

A non-technical wine writer, who enjoys the moment with the wine, as much as the wine. Twitter.com/WineRaconteur Instagram/thewineraconteur Facebook/ The Wine Raconteur
View all posts by thewineraconteur →
This entry was posted in Dining, Wine and tagged Blanc de Noir, California, Champagne, Napa Valley, Piper Sonoma, Sauvignon Blanc, Sonoma Valley, St. Supery. Bookmark the permalink.