Posted on January 21, 2013 by thewineraconteur 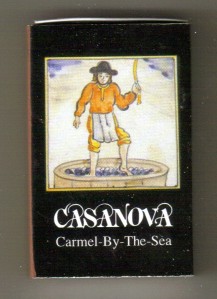 We started off with a ravioli appetizer and then we both ordered the Free Range Chicken as we both wanted to relive that moment.  When it arrived, we were both happy that we had ordered it, as it was just as good as we remembered it from the first time we were there.

One unusual and sad note was, when our waiter brought out the knives for our dinner entrée, the Laguiole steak knives were not presented.  A more pedestrian model was presented, albeit a fine steak knife was in its place.  When I mentioned it to our waiter, he said that if I would like to have them, that they still have the service, but they had so many stolen, that they stopped using them as a regular item.  We were both appalled when we heard that.  To think that such a fine establishment with a presumed quality clientele base would have this problem.

I had asked our waiter if there was a wine the restaurant was very pleased with, and he suggested the Georis Estate Merlot ‘Le Sanglier’ Carmel Valley 2002.  I said that is fine, and he went to get us a bottle.  When he returned I mentioned that we had a bottle of Georis wine the last time we were there as well, and he said that the principals of the restaurant also are in the winery as well.  We got to talking about wines, and after dinner our waiter took me on a tour of the wine cellar of the restaurant and I was in Nirvana.  It was a good size room that felt small because there were so many bottles of wine in the racks.  I had cellar envy, but that occurs often because a well filled cellar is a wonderful sight to behold.

After I returned from the tour, my Bride and I had coffee, dessert and some vintage port to finish another fine meal.  Then we walked back to our hotel room and looked forward to the rest of our vacation.

A non-technical wine writer, who enjoys the moment with the wine, as much as the wine. Twitter.com/WineRaconteur Instagram/thewineraconteur Facebook/ The Wine Raconteur
View all posts by thewineraconteur →
This entry was posted in Dining, Wine and tagged California, Carmel Valley, Georis, Le Sanglier, Merlot. Bookmark the permalink.