An Afternoon Dinner with Friends

Posted on November 14, 2012 by thewineraconteur

We had a nice dinner with some of Bride’s girlfriends and their spouses; they have stayed in touch since their initial times in Elementary, Junior High and High School.  The dinner was held at our house this time, so my Bride was a whirling-dervish trying to make everything perfect as is her disposition.

We had set out cheese and crackers and shrimp cocktails for appetizers, and one of the ladies also brought some additional cheese and crackers to start off with.  Then we had my Bride’s Caesar Salad, which is always a hit.  One of the other ladies brought in some Chicken Soup that was so thick with meat and vegetables it could have been a meal in its self.   We then served Salmon filets with a Teriyaki glaze and Armenian Pilaf.  The lady that brought the soup also brought a large pan of grilled vegetables that complimented the dinner.  For dessert the other lady brought a flourless apple cake that had a rich taste and not overly sweet and delicious.

After dinner and more discussions from the ladies and catching up, there was a lively game of cards.  My Bride taught the others a game that they had never heard of, but they were willing students.

For the wine selections, I had a rather eclectic mix of wines for the afternoon.  We started with a Clos du Bois North Coast Chardonnay 2009 which was a simple but tasty choice with the appetizers.  While we were still in the appetizer stage of the meal, I opened up a bottle of wine that my Bride had received from one of her sisters; called Oakey Blonde from Washington Street Wine House from New Baltimore, Michigan.   I had never heard of the wine or the winery and looked them up later in the day, Oakey Blonde was listed as an Australian Chardonnay, and as there was not much in the write ups about the different wines on the site, I must presume that this winery makes wines from concentrates as some of the other wines that they offer were international in sourcing.  The wine was a soft Chardonnay, and perhaps would have been better in the hotter months of summer.  Since we were still enjoying good conversations and the appetizers I opened another bottle of white wine.  This wine was Chateau Tanunda Grand Barossa Riesling 2010 from Australia.  Chateau Tanunda states that they were the first to plant vines in Barossa in 1845.  I was a little concerned that the wine might be too sweet after the other two whites, but it was a nice dry Riesling that worked as a fine segues into the dinner portion of the afternoon.

Then onto the red wine for the dinner, I brought up a bottle of Schweiger Vineyard Merlot 2000 from the Spring Mountain District of Napa Valley.  As I tried to uncork the bottle the cork shattered which caused me some concern, and then I tried using the spring steel cork remover with no avail.  I had to push the cork in, and grab a decanter and a funnel, in these cases I use a paper coffee filter inserted into the funnel and just start pouring the wine.  This so far has always worked, and the good news is that the wine was fine, and the extra aeration from the forced decanting opened up the wine instantly.  This Merlot wine worked very well with the salmon and did not compete with it.  After dinner, there was a big card game and I opened a bottle of Chariot Gypsy Red 2009 as it is a good sipping wine, while everyone was talking and having a good time. 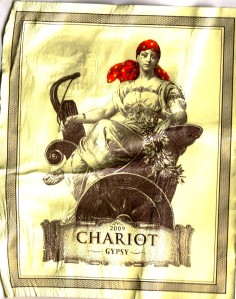