Ernesto’s and a Cetamura Chianti

Posted on October 7, 2012 by thewineraconteur

Ernesto’s billed themselves as “An Italian Country Inn” with a more casual side called Ernie’s in the back.  When I first went to this location it was known as the Hillside and the owner/chef was a big game hunter and he used to offer some very exotic entrees from his hunts.  That was years ago, and then it changed hands to Ernesto’s.  The restaurant has had ups and downs about reviews, but was always considered a fancy family style restaurant with linens, and there used to be a strolling violinist on certain days, not to mention that in the Ernie’s section one could be entertained by live music and an ad-hoc dance floor.  The restaurant’s name has changed once and is now know as the Courthouse Grille with a revamped menu, but still maintaining some of the stand-by dishes. 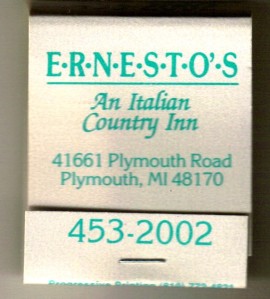 The food was of a classic Italian eatery, nothing out of the ordinary, but always a place where one could get a fine meal.  There were all the classic dishes of pasta, that one would expect, plus some fine veal, beef and seafood offerings.   There was not one dish that appealed to more than another, but we knew that we could go there and be happy with our selection.  It was the type of restaurant that a large group could go to and everybody would be happy and sated when we left. 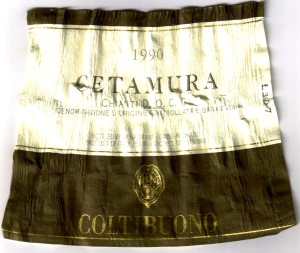 The wine list was not large and tended to lean of course to Italian wines, which is as it should be.   One evening we enjoyed a couple of bottles of 1990 Cetamura Chianti from Coltibuono with friends.  This was just a classic example of a well made Chianti wine, not even a Classico designation, but it fulfilled the requirements of the evening.   There is something about a Chianti wine that makes Italian food become even more of “comfort food” then it already is.   This Cetamura had that deep color that looks like Chianti, and it did not have the nose that I sometimes find in Chianti wines of egg whites, which sometimes turns me off.  I always think of egg whites from the old home-made wines that I would taste that we would receive as gifts from family friends in the old neighborhood.  I am not sure, but I once heard that some of the older men would use egg whites as a filter as they were getting ready to bottle their creations.  That may or may not be true, but I do find that occasionally with some bottles of Chianti to this day.  Of course I may be predisposed to anticipate it with a wine that I may presume ahead of time, not to be of the caliber of quality that I expect.  Though I do try to be open minded on each bottle of wine, I think past memories tend to be hard to change.

A non-technical wine writer, who enjoys the moment with the wine, as much as the wine. Twitter.com/WineRaconteur Instagram/thewineraconteur Facebook/ The Wine Raconteur
View all posts by thewineraconteur →
This entry was posted in Dining, Wine and tagged Cetamura, Chianti, Coltibuono, Italy. Bookmark the permalink.

3 Responses to Ernesto’s and a Cetamura Chianti