Posted on August 15, 2012 by thewineraconteur

Say Excalibur to a Detroit, especially a car guy and they think of a hot car.  Say Excalibur to the literate and they think of the sword.  Combine the two together and you get a restaurant that was one of the hot spots in the Detroit area.  They had lounge musicians to play music that their clientele wanted to dance to.  There was also the wink, wink sly undertone that it was a “connected” joint before Goodfellas and The Sopranos. 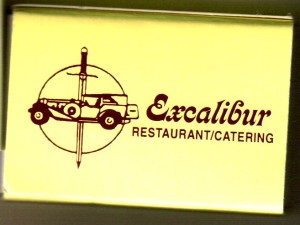 It was in an awkward location even being on the wrong side of traffic for most people going home.  That did not stop the regulars and the curious.  It was an old fashion steak house before the steakhouse rage.   They capitalized on a few dishes that were near and dear to the dining crowd, of dishes that were made famous by earlier restaurants that had succumbed to the malaise of downtown Detroit.

A typical dinner for us was a classic Caesar Salad (until my Bride discovered the ultimate dressing recipe and now I do not even think of ordering one out of the house).  Then you had to order the Shrimp Scampi Maison, Veal Oscar and Filet Mignons.   Some of the lobster and crab entrees were priced by the pound.  They offered all of the sides that are now standard at the modern chain steak houses.

It may have been the first restaurant that I tried Chateau Gazin one of the best wines of the Pomerol district.  A wine that is so rich and robust I would order when ever I had the chance, even to this day.   They also carried the good Mondavi wines, the good Beringer wines, a couple of good white and red Burgundy wines and they also offered some up and coming wines from Australia.  It also made sure that it had plenty of Ruffino “Ducale Gold” which was at the time the hottest Chianti wine, until the Super Tuscany wines entered the scene. 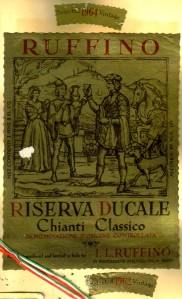 All that food and then you could dance the calories off through the evening if you were so inclined.  During their time of the street, there were enough that enjoyed the food, the wine and the dancing.  I still miss the places like that.

A non-technical wine writer, who enjoys the moment with the wine, as much as the wine. Twitter.com/WineRaconteur Instagram/thewineraconteur Facebook/ The Wine Raconteur
View all posts by thewineraconteur →
This entry was posted in Wine and tagged Chateau Gazin, Excalibur, Ruffino Riserva Ducale Gold. Bookmark the permalink.